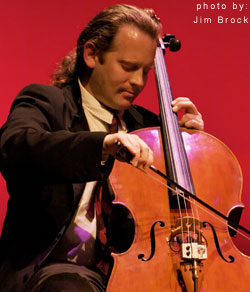 Joseph Harvey is a cellist and self-taught web hobbyist living in Los Angeles. His performance ensemble, String Theory, came to Los Angeles in 2002 to begin working in the film music industry. He became acquainted with Grant Barbeito through the L.A. performing arts community and has since collaborated with Grant on a number of diverse projects, including website design, film editing, animation, and film music composition. He has been involved with Earth Protect since before it existed.