Posted by ep-admin on Friday, 01 October 2010 in Wildlife Conservation

The Bears are hungry in the Rockies

A shortage of berries and other foods that hungry bears normally rely on to bulk up before hibernation has sent conflicts with humans spiraling to unprecedented levels in the Rockies. 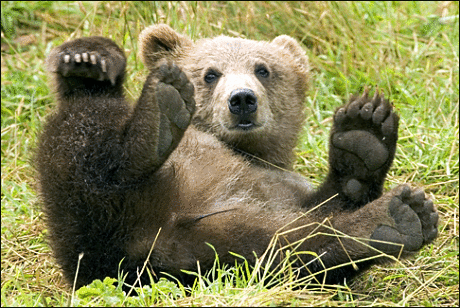 Wildlife officials in parts of Idaho, Montana and Wyoming say they are experiencing a record year for so-called problem bears, which wander from the wilds into civilization -- and into trouble. State and federal bear biologists say they are overrun this season with reports about errant grizzly and black bears foraging in everything from garbage cans to garages, in every place from golf courses to city centers. "I've had as many as 20 calls a day," said Tim Manley, a grizzly bear management specialist with the Montana Fish, Wildlife and Parks Department.
Scientists say bears this year are wrestling with challenging conditions. For starters, the mild winter meant bears emerging from their dens in the spring encountered fewer weakened or winter-killed wildlife like elk to prey on.

And late spring snows, which blanketed the high country and pushed bears to lower elevations earlier, delayed or even destroyed the crop of fruit-producing shrubs bears favor, such as huckleberries and hawthorns.
Conflicts between wildlife and humans almost always center on food, and when supplies of nourishment are low in the mountains, bears congregate closer to the valleys, where people live and livestock is conveniently located.

Chuck Schwartz, head of a group of government scientists who monitor the estimated 600 grizzlies in the Yellowstone region -- parts of Idaho, Montana and Wyoming -- said conflicts with bears invariably rise when food supplies fall.
"If a natural food source is scarce, bears don't curl up and die -- they just go looking for something to eat," he said.
Both grizzlies and black bears are considered opportunistic omnivores, animals that will switch from fruit to fish, from nuts to meat -- or any combination in between -- according to the dictates of their environment.