Coral Bleaching in the Caribbean 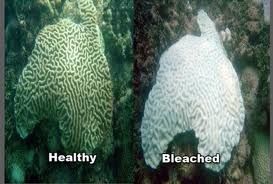 Due to above-average water temperatures in the Caribbean Sea, the National Oceanic and Atmospheric Administration (NOAA) predicts that coral bleaching will be very likely this year. It may even be as severe as 2005 when 80 percent of corals were bleached and 40 percent died. There have been reports from several sites already in the Caribbean as well as from other parts of the world.

Coral bleaching is the whitening of otherwise colorful corals due to stress-caused death or expulsion of the zooxanthellae, unicellular protozoa (algae) that live in a symbiotic relationship with the corals. The zooxanthellae are photosynthetic organisms that live within the tissues and give the coral its distinct coloration. When they go, so does the color, causing the coral to become white or "bleached." The stress is triggered by environmental changes such as a change in temperature, change in water chemistry, lack of zooplankton (what the coral eats), or increased sedimentation.

The most common stress is increasing temperature, which is what's happening in the Caribbean, particularly the southeast Caribbean. "High temperatures cause corals to force out the symbiotic algae that provide them with food. This makes the corals appear white or 'bleached' and can increase outbreaks of infectious disease," said Mark Eakin, Ph.D., coordinator of NOAA’s Coral Reef Watch.

Prolonged coral bleaching can often be fatal to the coral, and potentially devastating to the coral reef ecosystem, home to an abundance of marine biodiversity. It can also have an economic impact on the communities in places like the Caribbean, United States, Australia, and wherever there are large coral habitats. According to NOAA, coral reefs provide benefits worth up to $375 billion each year around the world.

The sea temperature rise is bad this year, but not quite as bad as 2005. That year's coral bleaching was result of the most intense thermal stress ever recorded in the Caribbean. However, this year marks another serious loss of coral habitat in the tropics. NOAA has conducted a scientific survey off the coasts of Texas and Louisiana, plus constant satellite monitoring under the Coral Reef Watch program.