The Gulf of Mexico oil spill continued to washed ashore Florida's Panhandle on Saturday, stunning tourists and locals alike, as government officials said the amount of oil a makeshift containment cap is capturing from the ocean-bottom gusher is slowly increasing.

BP's cap, initially put into place on Thursday, collected 6,000 barrels (252,000 gallons) of oil "in the last 24 hours," said Coast Guard Adm. Thad Allen, the government's point man for the disaster, on Saturday morning. Official estimates are that 12,000 to 25,000 barrels of oil are gushing out underwater each day, but some scientists have said the number could be substantially higher. 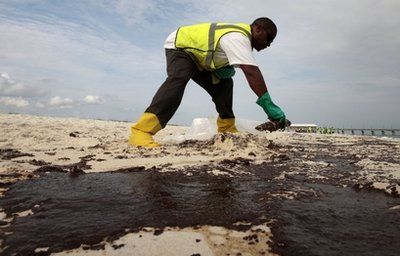 Allen said the oil being captured is "slowly increasing," but also expressed concern as the oil "is starting to move north and slightly east," further putting Florida's Panhandle in danger.

A light sheen, about 100 yards by 3 miles wide, was confirmed about .6 miles from Pensacola Beach, where tourists and locals gathered, carrying cameras or little shovels and plastic bags and hunting for tar balls splattered on the sand by the night's high tide.

The sugar white sand on the beach is stained light brown by the oil, which first washed ashore on Friday. Escambia County officials also reported tar balls at Perdido Key, east of Pensacola Beach. Florida officials have said the beaches will stay open.

Governor Charlie Crist toured the Pensacola Beach Saturday morning with singer Jimmy Buffett, whose Margaritaville hotel is supposed to open June 24 in the city. Crist was also was scheduled to take an aerial tour of the area with the Department of Environmental Protection.

Crist said Saturday that he would continue to ask for more oil-containment booms to keep oil off Florida’s shoreline. But at a when asked at a press conference if the answer was to place more booms to protect beaches, the Coast Guard’s Allen said the solution was not so simple.

"The hardest place to pick up oil is a marsh or a wetland. The easiest place to remove oil is a sandy beach," Allen said. BP expects about 400 workers to spread along the Pensacola Beach area to continue cleanup efforts Saturday.

"I want to see the President of the United States here in Escambia County," he said, later adding that "we have to keep the oil from leaking first and do everything we can to keep more from coming ashore...We need more skimmers down here...What we need to see out of British Petroleum is more money."