Posted by Wolf on Wednesday, 11 May 2011 in Sustainable Development

The Emerging Market for Small Renewables in California 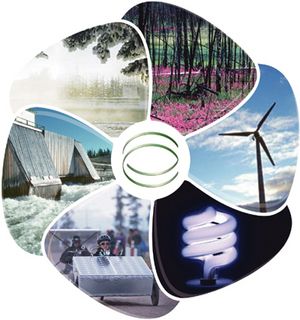 The long battle between public and private power is flaring up again. California is the hot spot because the state legislature has lined up on the side of Community Choice Aggregation (CCA), a form of public power lite in which communities choose power sources but distribution is left to the incumbent utilities.

Several communities have tried but none succeeded until the Marin Energy Authority (or Marin Clean Energy) started operations last year.  MEA started with 8,500 customers but is adding news customers continually. It estimates it will reach 70,000 customers by 2012. The total potential is about 100,000 customers, or more if other communities join them.

“We are filling a niche market for mid-sized renewable energy generation in the 20 to 60 MW range,” said Dawn Weisz, interim director of MEA.  “When we went out to solicit renewable power offers, Pacific Gas & Electric told us we would not get any bids. We were looking for 40 MW. We were offered over 600.  Almost all was solar.”  Three firms are short-listed: LS Power, Sun Power and enXco.

Since 2002, Marin has spent or borrowed about $3.5 million to get its CCA up and running. Their pioneering work means that entry for other communities will be cheaper.

Ms.Weisz has been working on CCA for nine years and has the scars to prove it:  “PG&E spent $4.1 million in Marin County and $46 million state-wide to prevent the birth of this CCA or any other.”

She does not mince words when describing what she and the elected officials who backed CCA were up against:  “There were almost daily glossy mailers full of inaccurate information and fear tactics slandering our program.”

Direct calls to residents caused many to “opt out” because of false information about lights going out and bills doubling, said Ms.Weisz. As a result, 20% of potential CCA customers opted out.  A recent California Public Utilities ruling turns over the process of polling potential customers to the CCA.

The fact that state legislation allows CCAs to count customers "in" unless they specifically "opt out" is a measure of the support state lawmakers have provided. Legislation now pending prohibits incumbent utilities from many of the aggressive tactics that have torpedoed CCAs elsewhere in the state.

Marin’s efforts began as a measure to reduce greenhouse gas emissions in the county. Says Ms. Weisz: “When we were reviewing the GHG reductions that would come from various measures we realized that all were very small compared to a CCA, which would take over choosing power sources. With one fell swoop you could eliminate all GHG from power sources.”

When it launched last fall, Marin Energy Authority’s goal was to offer 20% renewable energy to its customers,” said Ms.Weisz. “We were able to offer 27.5% compared to the state-mandated 20%.”  The state recently increased the mandate to one third.  PG&E has about 17% under contract, according to Ms. Weisz.

The Marin CCA offers two grades of service: ight green and deep green. Deep green is 100% renewable and costs about 10% more than traditional energy service. Overall, the light green rates are competitive with PG&E.  Over the long run, as the cost of renewables goes down, CCA rates could even be lower.

Ms. Weisz praised their full service contractor, Shell Energy North America, for helping Marin Clean Energy get started. The CCA is lean with only four full-time employees, but it hopes to wean itself away from the full service contract it has with its technical and legal team within two years.

MEA has begun contracting for its own energy sources, having put 3.2 MW of landfill gas generation under contract. The CCA’s ultimate goal is to divert the county dollars going to outside energy sources to the local economy. They pay for locally-generated renewable energy better than PG&E – a typical rate of 7 cents a kilowatt-hour (kWh) plus 1 cent.  They are presently fighting before the public utilities commission for the right to administer energy efficiency money.  At present every customer pays into a “public goods”  fund which is doled out by the incumbent utility.  Marin Clean Energy thinks it can do a better job and create more local jobs with the money.

An intriguing possibility for the Marin CCA is unlimited expansion.  They have had so many inquiries from other local governments that they have set up a program to assist by including them or consulting with them.

Nothing in the law limits a CCA to a specific geographic territory.  All that is required is an ordinance from a local government.   The Marin Energy Authority presently includes the county and seven cities. The board is working on a plan for including other jurisdictions.

Is a state-wide CCA a possibility?  Or will other local governments go their own ways using Marin has a model?   Either way, a vast new market for distributed local renewable energy sources could be opening up in California.