Posted by ep-admin on Wednesday, 25 August 2010 in Climate Change

Scientists hope to collect electricity from the air 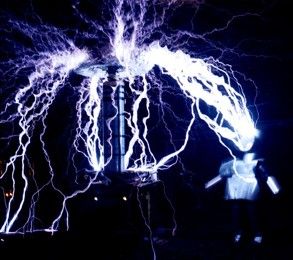 Nikola Tesla once dreamed of being able to harness electricity from the air. Now, research being conducted at Brazil’s University of Campinas (UC) is indicating that such a scenario may indeed become a reality. Professor Fernando Galembeck, a UC chemist, is leading the study into the ways in which electricity builds up and spreads in the atmosphere, and how it could be collected. “Our research could pave the way for turning electricity from the atmosphere into an alternative energy source for the future," he stated. "Just as solar energy could free some households from paying electric bills, this promising new energy source could have a similar effect."

Scientists once believed that water droplets in the atmosphere were electrically neutral, even after having come into contact with charged dust particles. Galembeck and his UC team, however, have shown that this isn’t the case. In a lab experiment, they noted that tiny particles of silica and aluminum phosphate became negatively and positively charged (respectively) when circulated in highly-humid air. “This was clear evidence that water in the atmosphere can accumulate electrical charges and transfer them to other materials it comes into contact with,” Galembeck explained. “We are calling this 'hygroelectricity,' meaning 'humidity electricity'.”

He now pictures collectors, not unlike solar cells, that could someday collect and distribute hygroelectricity from the air. Just as solar cells work best in sunny places, his collectors would do best in humid parts of the world. He even believes it’s possible that by diminishing the electrical charge in the air, his collectors could prevent lightning, especially if mounted on top of tall buildings. His team is currently experimenting with different metals, to find out which would work best for capturing atmospheric electricity and preventing lightning strikes.

"These are fascinating ideas that new studies by ourselves and by other scientific teams suggest are now possible," he said. "We certainly have a long way to go. But the benefits in the long range of harnessing hygroelectricity could be substantial."