Rescue Plan for Endangered Sea Turtles in the Gulf of Mexico 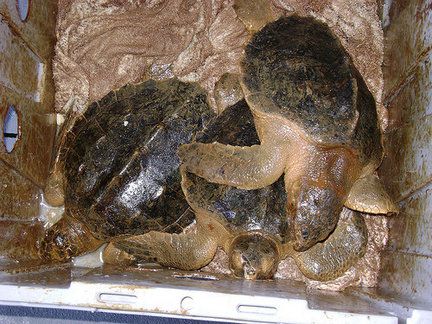 Wildlife experts in the United States have announced an ambitious plan to rescue hundreds of turtle nests and eggs from the potential impacts of the oil spill in the Gulf of Mexico.

Using a strategy never tested before on such a massive scale, the U.S. Fish and Wildlife Service will coordinate the collection of around 80,000 eggs from 800 nests on the beaches of Alabama and northwest Florida and move them hundreds of miles away to the oil-free Atlantic coast.

Collected at a point in the incubation cycle where the loss of viable eggs should be minimised, the nests will be transported in protective containers and kept at a climate-controlled location before successful hatchlings are released on the east central coast of Florida.

As the oil spill coincided with the turtle's breeding season, it is feared that without action many turtle hatchlings could become coated in oil or be poisoned by food soaked in crude. So far, the loggerhead turtle, the world's largest hard-shelled turtle, and Kemp's ridley turtle, the most critically endangered sea turtle, have been most severely affected. Both these species are already threatened by habitat loss and bycatch in commercial fisheries; however, it is hoped that the bulk of the nests in the northern gulf will be saved, protecting these vulnerable reptiles from further declines.