The aim of Earth Day 2011 is to gather at least one billion acts of services to the environment by the time the 2012 United Nations Conference on Sustainable Development rolls around, otherwise known as Rio+20. So far the Earth Day Network has recorded over 70 million Acts of Green as part of Earth Day 2011 and now school children in the Middle East have contributed in their own way by planting trees at their school.

By clicking up another 650 acts the school children at the Patriarch Diodoros the 1st School in Amman, Jordan are helping make Earth Day 2001 become the world's largest environmental campaign ever. 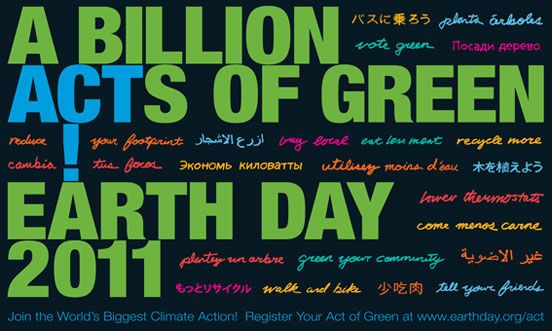 The students at the Patriarch Diodoros School listened to talks about Earth Day and environmental issues, discussions on how planting trees can help the environment and also how to save precious energy resources. Naming themselves 'Earth Day Volunteers', they then headed into the gardens surrounding their school and planted trees and flowers.

The President of Earth Day Network, Kathleen Rogers, said '''Patriarch Diodoros School is a prime example of the great commitment our partners in the Middle East continue to demonstrate in helping us collect a billion Acts of Green worldwide. Hearing the voices of children at PDS and elsewhere is critical to bringing the attention of government leaders to the movement''.

The students at the school recognise how vital the environment is to their own futures and see Earth Day 2011 as an opportunity to raise awareness to sustainability and the importance of individual actions. Abdul Aziz Al-Gandye, a student in grade 4 at the Patriarch Diodoros School said, ''We all should contribute to raising the load of the environmental pollution on the shoulders of our Mother Earth''.

The Earth Day Network hope that by reaching A Billion Acts of Green they will encourage the government leaders who are meeting at the UN Rio+20 conference to really act. They want to demonstrate just how seriously the citizens of Planet Earth take sustainability and care for the environment.

So now is the perfect time to complete your own Act of Green and add your support to Earth Day 2011.

Earth day was founded in 1970 by Senator Gaylord Nelson, but only after several years in the planning. Frustrated that the environment was a “non-issue” in politics in the 1960s, Senator Nelson flew to Washington, and presented an idea that both the then Attorney General, Robert Kennedy, and then President, John F. Kennedy, both liked. What ensued from that meeting was a “five-day, 11-state conservation tour in September 1963″ by President Kennedy. (The tour took place a mere two months before he was assassinated.)

After several years speaking throughout the country on the environmental degradation he saw all around him, and spurred on by “teach-ins”, the anti-Vietnam war protests taking place across the U.S., Nelson finally hit upon his idea – create “a huge grassroots protest over what was happening to our environment[.]”

With “neither the time nor resources to organize 20 million demonstrators,” Nelson, his senatorial staff and dozens of volunteers, including “thousands of schools and local communities” brought together an American public just waiting for a platform to voice their concerns about the environment. Nelson said, “That was the remarkable thing about Earth Day. It organized itself.” [1]

After 40 years, Earth Day has organized itself into 77,862,183 people having pledged to do their part to help planet earth.

This year, Earth Day 2011 is being organized around the theme of A Billion Acts of Green®, which encourages individuals, corporations and non-corporate organizations to “live and act sustainably.”

There are all kinds of ways to participate in Earth Day, from local events you can host or attend, to things to do with the whole family, to easy ways to green your Earth Day.