Posted by EarthDude on Sunday, 10 April 2011 in Wildlife Conservation 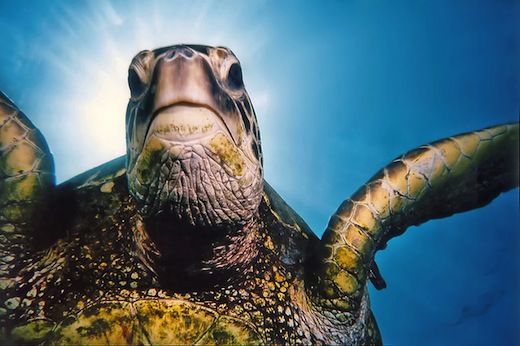 Five things you may or may not know about sea turtles: They can live 80 years or longer. They're important to ocean and beach ecologies. They're immune to (and happily feed on) deadly box jellyfish. All seven species worldwide are either endangered or critically endangered. And solar panels might be their salvation.

People sometimes ask me why the Sierra Club is so focused on stopping dirty coal plants or fighting to get our country off of oil and onto clean, renewable energy sources. After all, you won't find pictures of wind turbines or solar panels in our Wilderness Calendar (at least not this year). Why not stick to protecting wild places and wild creatures -- like sea turtles and sequoia trees?

The answer is that we've never been more focused on saving wild places. But we can't succeed without also looking at the bigger picture. We must stop direct threats to habitat and species, whether it's from logging, mining, residential development, or other sources. But we must also address threats that might come from far away. And doing that almost always leads us back to energy -- whether it's the effect of climate disruption from burning fossil fuels or the increasingly harsh environmental consequences of extracting coal and oil.

Consider sea turtles. Five species are found in the Gulf of Mexico. Last year's BP oil disaster killed hundreds of sea turtles. That's not surprising, because sea turtles are particularly vulnerable to oil -- both in and out of the water. One species, Kemp's ridley, has its only nesting grounds in the world on the beaches of the western Gulf. But although the National Commission's official report on the Deepwater Horizon disaster dutifully reported more than 600 dead sea turtles, that's not a final number. Dead turtles (and bottlenose dolphins, which were the most-affected marine mammal) are still washing up on the beaches of the Gulf in record numbers.

Meanwhile, the Obama administration has lifted its ban on deepwater drilling in the Gulf, and BP is reportedly ready to resume operations at ten wells. That's right -- although the administration's investigation has not yet concluded nor presented a final set of recommendations, expanded drilling may soon occur. Would this be happening if we weren't so dependent on oil? Moving America to clean energy suddenly makes a lot of sense if you're a sea turtle.

But how we get the oil is only part of the problem for the turtles. Sea turtles -- and all living creatures -- have to deal with the effect that burning oil and coal is having on climate and, as a result, their habitats. As the climate is disrupted, some percentage of critical habitats will be lost no matter what we do. That makes it doubly important that we act to preserve as much of what we have now as we possibly can.

Want to help out an octogenarian, deadly-jellyfish-eating sea turtle? Ask the Obama administration to restore the Northeast Ecological Corridor's status as a nature reserve. And once you've done that, look into getting some solar panels.