Stingrays are fascinating animals, brought to the attention of the media by a true accident with the death of Steve Irwin, and by recent discoveries of Giant Stingray's in Thailand. Though related to the sharks they are not as aggressive and are not prone to attack humans. They are necessary and should be respected. 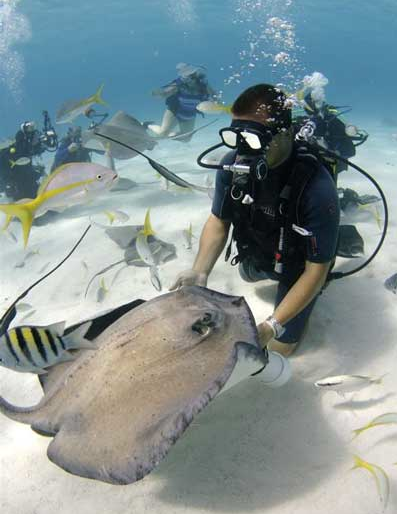 How many of you have had the chance to visit a Stingray exhibit at an aquarium or go to a place like “Stingray City” in the Caymans Islands and pet a live stingray? Many of you are aware that it was the spine of a stingray that resulted in the shocking death of the famous crocodile hunter, Steve Irwin. The reason the death of Steve Irwin by stingray was so shocking is that according to Ohio’s Columbus Zoo and Aquarium curator, Mike Brittsan, only 17 people have been killed worldwide by stingrays since 1860.1 These animals are very docile, and according to Dr. Bryan Fry, Deputy Director, Australian Venom Research of the University of Melbourne, the ray that killed Steve Irwin was probably only attacking “out of fear.”2

There are about 200 species of these flattened cartilaginous cousins of the shark, called stingrays for their sometimes spine-bearing long tails.3 I, myself have walked with stingrays at Sea World in San Diego, and when I was in my teens I caught one accidentally while fishing in the Chesapeake Bay. Stingrays come in two types, the bottom dwellers (“benthic”) and the swimming variety (“pelagic”), and can be found in salt and fresh water, and all feed primarily on bottom dwelling organisms, though at least one variety feeds on plankton.4 Marine stingrays are found in coastal waters all over the world, and freshwater rays are found in Asia, Africa and South America.5 In America, Stingrays can be found as far north as New Jersey.6

I don’t know what kind I caught, only that its fin got caught on my fishing line, so it was probably a swimmer, and it was so strong I almost got pulled overboard. I would say it was probably 3 feet across, but keep in mind, I was a little girl and everything seemed bigger to me back then. My grandfather, after my uncle took the line from me and pulled the ray up onto the side of the boat, cut the hook out of its fin and let it go. I remember it was black on top and snow white underneath.

Surprise fact: If a stingray has a spine or barb (and it can have up to 4), it will be located at the base or middle of the tail area, not the tip, and will have rows of sharp barbs resembling a serrate knife, according to the ReefQuest Center for Shark Research.7 Some cousins of stingrays do not have stings, for example, skates (a type of marine “ray”) have sharp thorns on their tail and dorsal surface and no venom. They also reproduce by laying eggs in a leathery capsule, while stingrays give birth to live young.8

The sting of a stingray is not meant to kill, according to Simon Pierce, PhD student in the School of Biomedical Sciences at The University of Queensland, but to convince predators not to want to eat them, and when it raises its tail like a scorpion, it is a clear signal to get away.9 The venom contained in the sting of a stingray is protein based and causes great pain and can effect heart rate and respiration, but it is rarely lethal.10 No anti-venom exists, but because the venom is protein based, exposure to high temperatures causes it to become inactive.11 The barbs on the rays at Sea World are clipped for your safety, though I’d still be careful and not do anything to harm or provoke them.12

According to Dr. Fry, it was not the venom that killed the crocodile hunter, but the ray that hit Steve Irwin was probably up to 7 feet across, with a barb up to 8 inches long- a venomous dagger.

The GIANT Stingray
In the past year, the largest species of Stingray, the Giant Stingray has had several sightings, many with pregnancy and births. For example, in April of last year, a fourteen foot long stingray was caught near Thai City. By the time National Geographic members of a study of the largest freshwater fish, Megafishes Project arrived, the ray had given birth to a dinner plate sized baby.13

On January 28, 2009, a 6.6 by 6.9 foot pregnant Giant female stingray, possibly the largest freshwater fish ever caught, was reported by the same study and released, this one missing a tail.14 This ray took 13 men to capture, and though it was missing its tail, it still had a 10 foot stinger attached.15

Stingrays are a needed animal!
Stingrays are predator animals that feed on other animals, and are a cousin to the shark. Their diet consists primarily of worms, clams, shrimp, crabs, snails and occasionally fish.16 You might think of them as the wildcats of the Ocean. Like the cats that feed on rats and other rodents, stingrays help to control the population of other smaller animals. They are a significant part of the water food chain. After the death of Steven Irwin, up to 10 stingrays were found dead on the beaches in Australia, potentially retribution for the crocodile hunters death. Michael Hornby, Director of Mr. Irwin’s Wildlife Warrior fund, has condemned the killings. Hornby states, "I hope everyone understands we have to protect wildlife now more than ever. This is what Steve was all about."17

Stingrays are docile animals with no intent to kill larger animals such as ourselves. They are a part of the food chain and the environment.

Over 1500 injuries due to Stingrays are reported each year in the United States, though the actual number is certainly higher.18 A way to ensure your safety in the Ocean is to shuffle in the sand, because rays will sense the motion and move away even if you brush against them. You can also buy protective footwear known by some as stingray boots when you wade in the Ocean. Respect and protect and they will not be a threat.