Posted by plantitfilm on Wednesday, 29 July 2009 in Clean Technology

Greenpeace Goes Guerilla in its War with HP

Greenpeace has started a war of sorts. Ironic? Not really, considering its adversary, Hewlett Packard (HP), and the two organizations’ history of contempt. 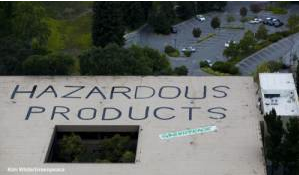 The eco activist network has taken on HP, which Greenpeace claims is producing hazardous chemicals and not making sufficient efforts to change its ways.

It all began in 2007, when HP promised to phase out dangerous substances, including BFR flame retardants and PVC plastics, from its products. (BFRs and PVC are highly toxic, and, when burned, release a chemical known to cause cancer.) HP lagged on fulfilling its promise, and in March 2009, Greenpeace rated HP low on Greenpeace’s Green Meter (HP’s e-waste rating was among the lowest of all PC makers rated). When this tactic did not prompt a change in HP’s behavior, Greenpeace, apparently, snapped.

Today, it sent activists to the HP headquarters in Palo Alto, California. Its tactics, this time, were a bit rogue: activists painted an 11,500-square-foot “Hazardous Products” message on HP buildings (in non-toxic finger-paint). Actor William Shatner also pitched in by leaving automated messages for HP employees, requesting that they address the problem.

HP’s position on the issue is, according to an email reported by Cnet News, quite different: it claims to have a commitment to “reducing the use of BFR/PVC in [its] products until these materials are eliminated entirely. [It] has introduced several new… products this year that use less BFR/PVC than previous generations.” It also claims to be a “worldwide leader in e-waste recycling.”

It looks like the war games may continue unresolved…