Posted by ep-admin on Sunday, 18 October 2009 in Biofuels

Ubiquitous and easy to grow, algae has long been a promising biomass-to-fuel candidate in the eyes of researchers. Now algae is a burgeoning sector in biofuels with several high-profile staart-ups, including Craig Venter’s Synthetic Genomics, and the interest of big-time investors like Bill Gates and ExxonMobil. Of course, hurdles still exist to make a competitive fuel. Algal biofuels still cost too much to produce—over $8 a gallon (pdf), according to the DOE. Furthermore, most existing strains do not yield oil in the quantities needed to quickly scale up to commercial production of biofuels. Companies also need to worry about contaminating local ecosystems and the amount of water needed to grow cultures in large batches. Despite these challenges inroads—and actual fuel—are being made in the nascent field. Here are 5 projects leading the pack today. 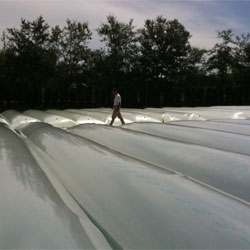 The Technology /// The company’s goal is to produce fuel directly from the algae without killing or harvesting the creatures, allowing for a shorter turnaround time to make fuel. The company claims its process lets it make around 6000 gallons per acre per year.

To Market /// Production is expected to begin by the end of 2010. Algenol intends to produce 1 billion gallons annually by 2012. They say their production costs will be around 85 cents per gallon. 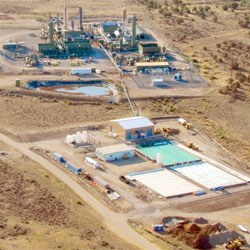 The Technology /// Solix uses specialized photo-bioreactors in which batches of microalgal cultures are grown in large, closed-growth chambers under controlled light and temperature conditions. The company claims its closed systems can produce up to seven times as much biomass as open-pond systems. Once the cultures are fully grown, their oil is extracted through the use of chemical solvents like benzene or ether. The solvents are mixed into the chambers to separate the oil from the algae, and it is then collected from the surface. Solix is also collaborating with the Los Alamos National Laboratory to use its acoustic-focusing technology to concentrate algal cells into a dense mixture by blasting them with sound waves. Oil can then be extracted from the mixture by squeezing it out; this makes the extraction process much easier and cheaper, obviating the need for chemical solvents. 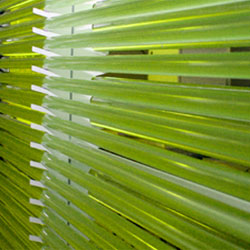 The Technology /// Sapphire’s focus is on “green crude," a liquid that has the same composition as crude oil, and is therefore compatible with existing refineries. The company has already shown that its fuel can be used in cars and even jets. Sapphire has a 100-acre pilot facility near Las Cruces, N.M. 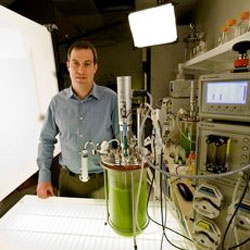 The Technology /// Solazyme engineers designer algal cultures using DNA from different strains to maximize oil production and size and grows them in large fermentation vessels before harvesting their oil. It first tested its jet fuel in late 2008.

To Market /// Solazyme claims that it is on track to produce over 20,000 gallons of fuel for the Navy by 2010. The company hopes to bring the cost of its fuel down to $60 to $80 per barrel within next two to three years. 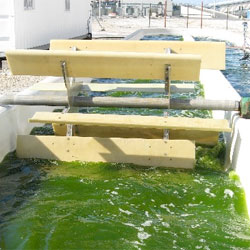 The Technology /// Seambiotic grows microalgal cultures in open ponds using flue gases like carbon dioxide and nitrogen from a nearby coal plant as feedstocks. Its 1000-square-meter facility produces roughly 23,000 grams of algae per day—three tons of algal biomass would yield around 100 to 200 gallons of biofuel. It recently formed a partnership with NASA to optimize the growth rates of its microalgae.

To Market /// Up and running since 2003, Seambiotic set up a pilot plant in 2005. Seambiotic expects its commercial plant to be ready by late 2009.