Posted by McCormick on Thursday, 15 November 2012 in Fishing 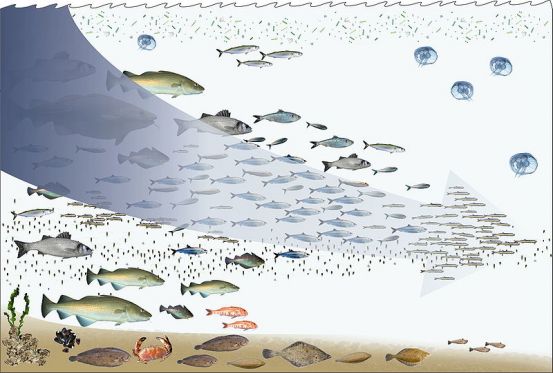 All over the world, food systems and the ecosystems they rely on are coming under pressure from the over-exploitation of natural resources. But nowhere are these impacts occurring as rapidly and dramatically as in the world's oceans.

Between 1970 and 1990, buoyed by generous fuel and boat-building subsidies, the harvesting capacity of the worlds combined fisheries grew eight times faster than the rate of growth in landings. This led to a situation where the capacity of the global aggregate fishing fleet is at least double what is needed to exploit the oceans sustainably.

A vicious cycle has ensued whereby fishing vessels have gone further and deeper in their hunt for fish, degrading marine environments and depleting stocks ever further. Fishing methods such as industrial bottom trawling - the equivalent of deforestation in deep waters — have proved particularly destructive and wasteful, while climate change, ocean acidification and pollution have further destabilised marine environments.

Faced with this crisis, it is tempting to put forward drastic solutions. Should we stop eating fish altogether? Should a sector that is hurtling down a path to its own extinction be brought to a complete halt?

Certainly at the global level urgent steps must be taken to clamp down on illegal, unregulated and unrecorded (IUU) fishing, and halt the depletion of endangered fish stocks.

But this can only be part of the solution, because it only addresses part of the global fish economy. In parallel to industrial trawlers and distance fleets, some 12 million small-scale fishers operate in coastal and inland marine areas across the world, deriving vital income and dietary protein from fisheries in a way that contributes crucially to the food security of whole communities.

Fish consumption accounts for 15 per cent of all animal protein consumed worldwide, and 22 of the 30 countries where fisheries contribute over a third of total animal protein supply are low-income food deficit countries – and therefore among the most food insecure. The sector also supports millions of livelihoods and incomes, often in zones where other economic opportunities are few and far between.

Governments must therefore take a dual approach that not only clamps down on harmful industrial practices, but also actively supports small-scale, artisanal fishers.

Industrial-scale fishing may be responsible for bringing most fish to port and onto people's plates, but only at a huge environmental and social cost. License and access agreements allow distance fleets to plunder foreign waters with often meagre supervision and monitoring from either the coastal state or the flag state. The consequences of this 'ocean-grabbing' are overfishing, unreported catch, incursions into protected waters, and, over time, the diversion of valuable fisheries resources away from local populations.

Meanwhile aquaculture has expanded massively, and may now provide up to 45% of fish for direct human consumption. But despite appearing productive, there are again major question marks over its sustainability. As is the case with agri-food systems, food moves not to where needs are greatest, but to where purchasing power is highest.

Such is the imbalance of purchasing power that the price wealthy consumers are willing to pay for farmed fish make certain wild catch more lucrative as an input to this process than as an end product for people who would be willing to consume it directly. The diversion of wild catch for feed in fish farms is like the diversion of rainforests to soy for feeding livestock in the West – it reduces local access to food resources, and entails a huge resource footprint for each food calorie that is yielded at the end of the chain.

The aquaculture and industrial fishing models may represent the 'economic' options, but only because economic signals are distorted. Fleets are able to pocket major subsidies while externalizing the costs of overfishing and resource degradation – it is vulnerable communities whose access to fish protein and fishing livelihoods are lost, and future generations who will pay the price when oceans across the world run dry.

Meanwhile, small-scale fishers make up a crucial part of the sector in many parts of the developing world. Their importance is sometimes underestimated because some of this small-scale fishing is purely occasional, functioning as an essential safety net for coastal communities in times of crisis. However, data shows that small-scale fishers actually catch more fish per gallon of fuel than industrial fleets, and, just as crucially, discard less fish.

Governments must urgently find ways to turn fisheries resources away from over-exploitation, and towards sustainable usage by local populations. In 2010 community-based user rights were granted to small-scale fishers on the largest freshwater lake in South East Asia (Tonle Sap), while in the Maldives a decision was recently taken to ban industrial tuna fishing in favour of local ‘pole and line’ fishers.

These examples point the way forward: fisheries resources must be co-managed in ways that involve the small-scale fishers who live from fisheries-based income, whose communities rely on local fish protein, and who have an inherent interest in sustaining these resources into the future.