Posted by Angel on Thursday, 15 November 2012 in Oil Spill

BP to Pay another $4.5 Billion for Criminal Charges 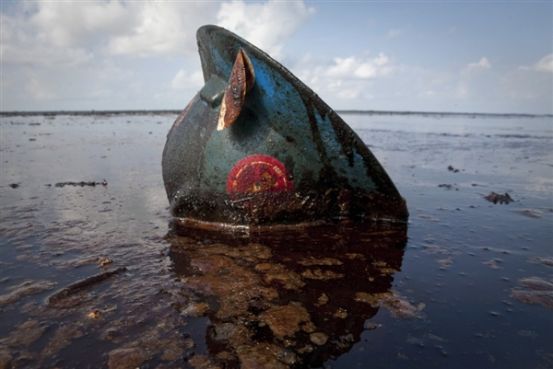 Two years ago British Petroleum had an accident in the Gulf of Mexico causing millions of gallons of oil to spill into the gulf. There was lying, hundreds of lawsuits and a major lack of leadership. Today there is some justice.

BP, said Thursday that it would pay $4.5 billion in fines and other payments to the government and plead guilty to 14 criminal charges in connection with the giant oil spill in the Gulf of Mexico two years ago.

The payments include $4 billion related to the criminal charges and $525 million to securities regulators, the company said in a statement. As part of the settlement, BP agreed to plead guilty to 11 felony counts of misconduct or neglect related to the deaths of 11 people in the Deepwater Horizon accident in April 2010, which released millions of barrels of oil into the gulf over the course of the next few months.

A law enforcement official familiar with the case said that two BP employees would also be charged with manslaughter in the case. United States Attorney General Eric Holder was scheduled to hold a news conference in New Orleans at 2 p.m. E.S.T. on Thursday to discuss the government’s actions in the case.

“All of us at BP deeply regret the tragic loss of life caused by the Deepwater Horizon accident as well as the impact of the spill on the Gulf coast region,” Robert Dudley, BP’s chief executive, said in a statement. “From the outset, we stepped up by responding to the spill, paying legitimate claims and funding restoration efforts in the Gulf. We apologize for our role in the accident, and as today’s resolution with the U.S. government further reflects, we have accepted responsibility for our actions.”

While the settlement dispels one dark cloud that has hovered over BP since the spill, others remain. BP is still subject to other claims, including billions of dollars in federal civil claims and claims for damages to natural resources.

In particular, BP noted that the settlement does not resolve what is potentially the largest penalty related to the spill: fines under the Clean Water Act. The potential fine for the spill under the act is $1,100 to $4,300 a barrel spilled. That means the fine could be as much as $21 billion.

BP also acknowledged that it had provided inaccurate information to the public early on about the rate at which oil was gushing from the well.

The company agreed to plead guilty to one felony count of obstruction of Congress over its statements on that issue. It also agreed to pay a civil penalty of $525 million to the Securities and Exchange Commission, spread over three years, to resolve the agency’s claims that the company made misleading filings to investors about the flow rate.

The criminal fine is one of the largest ever levied by the United States against a corporation, roughly equal to the $1.3 billion fine paid by Pfizer in 2009 for illegally marketing an arthritis drug.BP has repeatedly said it would like to reach a settlement with all claimants if the terms were reasonable. The unresolved issue of the claims has been weighing on BP’s share price.

On Thursday, BP’s American shares were trading at about $40 at midday, roughly unchanged on the day and down about 34 percent since the accident.

“It’s one less thing to be negative on BP about and a minor step in the right direction toward the rehabilitation of BP,” Iain Armstrong, an equity analyst at the investment manager Brewin Dolphin, in London, said. But he added that there were still concerns about remaining claims and that “lawyers might yet have their day at court.”

As part of Thursday’s agreements, BP said it was increasing its reserve for all costs and claims related to the spill to about $42 billion.