Posted by amir on Wednesday, 19 December 2012 in Climate Change 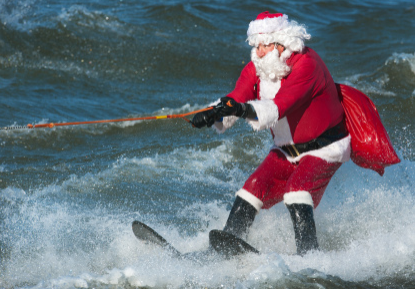 "We’re not selling many sleds, but the upside is they’re still buying other gifts," said Henry Kanner, who manages the downtown Natick shop.

While Kanner’s store offers products for any season, businesses focused exclusively on skiing, snowboarding and other winter sports are hoping for snow in a winter in which few flakes have fallen.

And, with the National Weather Service predicting temperatures in the 40s much of the rest of the week with occasional rain followed by colder but drier weather over the weekend, MetroWest is likely headed for another green Christmas, not white.

"I don’t think it’s going to happen this year," National Weather Service meteorologist Charles Foley said of a white Christmas. Cold, dry air should move in with "no mechanism to provide any moisture."

According to WCVB-TV meteorologist David Brown, 2010 was likely the last white Christmas in Boston. That year the region saw some snow a few days before the 25th and up to 2 feet of snow in the two days following the holiday, Brown said.

Teddy Schiavoni, owner of Summit Ski and Snowboard in Framingham, said sales are about even with last year, which also saw little snow. But, he estimated business would jump 30 percent if the ground were covered in white.

"The difficulty is that this time of year, when there’s no snow on the ground, people don’t necessarily go out of their way to purchase winter sporting goods," Schiavoni said. "We may lose sales to things like Xboxes."

Sean Halloran, a salesman at Village Ski and Snowboard in Franklin, said the "backyard effect" is sometimes also a factor. Some people do not consider skiing, even in northern New England where there is natural snow, until they see snow in their yard, he said.

Weston Ski Track workers made artificial snow during a couple of the colder nights this year, but have been watching the snow disappear amid rain and warm temperatures. Crews can create 2.5 kilometers of trail from artificial snow, but only about 0.3 kilometers were snow-covered and open Tuesday, manager Mark Jacobson said.

"I think it is still early," Jacobson said. "I don’t think December is a particularly good indicator of the season as a whole. We’ve seen a lot of seasons where there’s not consistent snow until Martin Luther King Jr. Day."