Posted by joeycello on Friday, 21 December 2012 in Climate Change

From unprecedented drought to killer cold, 2012 was a year of weather extremes. 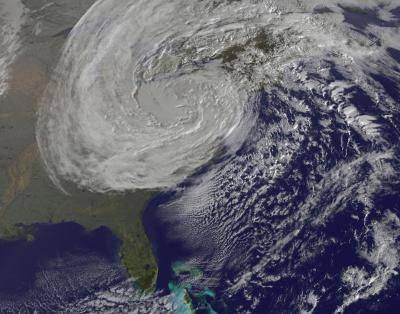 In 2012, the United States suffered 11 weather-related events that cost $1 billion apiece, according to a preliminary list released Thursday (Dec. 20) by the National Oceanic and Atmospheric Administration (NOAA). Economic losses for Hurricane Sandy and the yearlong drought are still being calculated, but NOAA estimates 2012 will surpass 2011 in terms of aggregate costs for disasters (exceeding $60 billion).

The World Meteorological Organization projects 2012 to be the warmest year on record since 1850, even with the cooling effects of La Niña in the early months. And 2013 could be even hotter, the WMO estimates.

Cold lows and hot highs
Winter's extremes included January's record snowfall in Alaska, which hit as the rest of the country sauntered around in T-shirts. In February, Europe suffered through a cold snap that killed hundreds of people and froze the continent's rivers and canals, interrupting commerce.

An early, April start to tornado season raised fears of another devastating series of twisters, as happened in 2011. But this year, the funnels fizzled out. In the end, 2012 may go down as the year with the fewest tornadoes on record.

The combination of an ongoing drought and a crippling heat wave throughout the summer had lethal effects on people, animals and crops. Nebraska experienced its driest year since record keeping started more than a century ago, according to NOAA. Colorado suffered its worst fire season in more than a decade, with western wildfires charring 9.15 million acres (37,000 square kilometers) as of November, according to the National Interagency Fire Center. [2012: A Year of Weather Extremes]

Super storms
But 2012 may ultimately stand out in the history books mostly due to its continent-sized storms, which relentlessly pounded coastlines in the Atlantic and the Pacific.

In Asia, super typhoons swept across Korea, China and Japan like cars on a train, one after another, causing record flooding. Even into December, Super Typhoon Bopha destroyed homes in the Philippines, claiming more than 1,000 lives.

The Atlantic hurricane season produced 19 named storms, well above the yearly average of 12, according to a statement from NOAA. Two tropical storms, Alberto and Beryl, developed in Maybefore the season even officially began.

However, 2012 was the seventh consecutive year that no major hurricanes (Category 3, 4 or 5) hit the United States. But Hurricane Sandy showed it doesn't take a big hurricane to make a major impact. [Hurricane Sandy: Photos of a Frankenstorm]

Sandy, which was a post-tropical cyclone when it made landfall, will go down in the record books as the second-costliest storm in U.S. history. Its tremendous storm surge, coupled with a high tide, wreaked havoc along the New Jersey and New York coastlines. Sandy registered the lowest barometric pressure in the history of the Northeast.

A higher number of named storms and hurricanes than predicted hit the Atlantic basin, in large part because El Niño, which likely would have suppressed overall storm activity, never materialized as anticipated by many climate models, NOAA said in a statement.

Yet several storms this year went largely unnoticed because they stayed out over the Atlantic. A persistent jet stream pattern over the eastern portion of the country helped steer many of this season's storms away from the United States, according to NOAA.

Outlook for 2013
Instead of El Niño, NOAA predicts that the neutral phase of the El Niño/ La Niña Southern Oscillation (ENSO) index will prevail through spring. Jokingly called "La Nada," it is the middle ground between El Niño and La Niña (the pattern associated with cool water in the equatorial Pacific).

The lack of a reliable weather pattern to hang a prediction on makes forecasting harder. The temperature outlook through March indicates above-normal temperatures for the southern half of the continental United States, except for coastal southern California, Florida and part of the southeast coast, according to the National Weather Service's Climate Prediction Center.