Posted by Angel on Saturday, 22 December 2012 in General Environment 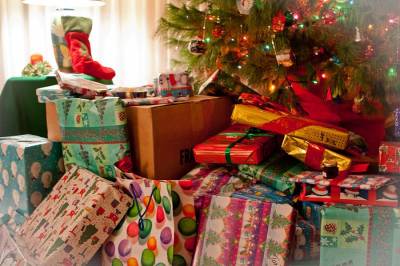 We have just been through what has now become an American tradition -- Black Friday -- and big box stores opened earlier than ever before, despite protests by employees at Walmart. Because of the recession, sales in physical retail stores were down 1.8 percent from the same date the year before; but as reported by Reuters on November 25, online retail sales jumped 26 percent, topping $1 billion. It is safe to say that consumerism is healthy and still growing in the U.S.

Christmas is supposed to be a happy and reflective time of year, not an anxious and rushed shopping frenzy. Yet the increasing crescendo of holiday music and social obligations put pressure on us to buy-buy-buy. This disconnect makes it a good time to think about the connection between the innocent pleasures of giving gifts, the larger issues of where those gifts came from, and the decidedly less pleasant question of what effects this annual orgy of consumerism has on the planet as a whole. Climate change scientists like to talk about greenhouse gasses, climate forcing, melting ice and sea level rise, all of which are tangible and measureable, and give them some clear arguments about what we need to change in order to keep the planet habitable: just cut down on emissions and stabilize CO2 levels below 390 parts per million in the next decade. What the scientists don't like to talk about is what is really causing all those emissions in the first place.

Because unlike measureable emissions and their interactions with the atmosphere, what's causing them seems vague, historical, hard to measure, and not very scientific. "Consumer culture" is studied by social scientists and historians who have not done a good job of explaining their findings to the scientists who dominate the discussion about climate change. Which is a shame, because consumer culture is really what is killing the planet before our eyes. It is time for us to listen to a small group of social scientists who have been talking about what psychologist Tom Princen at the University of Michigan calls "confronting consumption." This means that we need to get beyond vague talk about "sustainable lifestyles" and "green consumerism," while those who can afford it continue to live lavish lifestyles with no thought to their carbon-intensity.

Notice I have not placed the blame on the U.S. or any particular country. The high-consuming class is not bound by geography -- we live in urban areas, on beaches and in suburban enclaves all over the planet and we carry many different passports. With a little stretching of the boundaries of the categories, there are probably about a billion of us on the planet. We know who we are -- we own our own homes and apartments, drive new cars, eat whatever we want, and travel often. Many of us have second homes, investments, pensions, and everyday comforts we take for granted.

Then there are about 5 billion people who share the planet with us who dream about having the same consumer lifestyle. They know all about us -- they drive our cabs and clean our houses, watch the same telenovelas, soaps, and films, but they go home to tiny crowded slums, shanties, favelas and tenements with a single light bulb, or they live in dusty rural villages without running water. Their luxuries are a little meat or fish once in a while, maybe a cell phone and a bicycle. Otherwise they walk or ride a crowded bus; the things they really scrimp and save for are the very basics -- medical care in the present and school fees for the future.

For the last hundred years, we have been holding out the carrot of "progress" and "development" to the world's aspiring consumers, while warning the world about "overpopulation" and urging them to control themselves. If they would just hold down population growth and get educated, they too could achieve the economic miracle. But now we know this is a lie; according to the World Health Organization (WHO) the birth rate is falling just about everywhere, and world population should level off in the next 25 years. But there is simply not enough energy and material on this planet to support 6 or 7 billion people consuming the way we in the upper billion do. They are never going to have luxury, or even a pale imitation of it, because we simply cannot all be eating meat, driving cars, living in detached houses, and operating our dishwashers and 25 cubic foot refrigerators. A lot of our own comfortable lifestyle requires that there are masses of poor people somewhere else on the planet willing to sew our shirts for 25 cents an hour, or let our oil companies drill on their land for free because they have no choice.

The real issue of sustainability is whether we can really sustain the bare injustice of a planet where a lucky minority live in luxury while the others can only watch? How much longer will people believe the promise of progress? The fashion among forward-thinking economists is to talk about a "low growth" or "steady state" future economy where people will be happier with less, or that we will develop an economy based on sharing cars and other luxuries to replace private ownership. But who is going to accept less, so others can have more? My response to these proposals, as an anthropologist of consumer culture, is that they had better figure out how to invent a new human being too, because none of these schemes are going to satisfy people hungry for SUVs, RVs, ORVs, and ATVs, not to mention AK-47s and MAC-10s. They need to hang around some magazine racks in middle America convenience stores to see what's really being bought and sold.

Al Gore had an inconvenient truth. Mine is worse -- it is the kind of unspeakable obscenity that can gather a lynch mob. Just remember what happened to Jimmy Carter (and the Democratic party) when he gently suggested that Americans might have to turn down their comfort levels a little because of the OPEC oil embargo. But here it is. In the future, we are going to have to consume less, and distribute the goods more evenly. We cannot get out of this by just becoming more "efficient" or "conserving" more. So far every time we have made cars or appliances more efficient, we have just gobbled up the savings by driving more or having bigger fridges and freezers.

We will have to think a lot more about the environmental costs of some of our most cherished pleasures. How about a lot less travel and tourism, higher tolls and gas priced as high as it is in most other countries? Lotteries for access to nature? Smaller houses and lawns, closer together or even touching, like our European cousins, who use less than half the fossil fuel per capita as North Americans? Maybe we could reinstitute the luxury tax on large yachts, and huge outboard motors? Food and clothing should reflect the real costs of production and transportation, and I am suggesting that they should cost more; so that we are be paying the costs of decent wages, so the people who make the clothing and harvest and package the food can live the way we do. We need to have conversations about the unthinkable, about living with less. How can our grandchildren live at peace on this planet without driving the atmosphere into calamitous warming and drowning. This is not the time for utopian dreaming, and we cannot pretend that some new technological breakthrough is suddenly going to solve this very human problem of justice and culture. Like any addiction problem, the first step is admitting we have a problem. The next step might be to go after the pushers -- the super-consumers amongst us with multiple houses, yachts and private airplanes, who are used to being admired and envied. Perhaps ridicule and public shaming is the best response to individuals who insist on consuming the equivalent of a small town's resources, after all why should the rest of us try to be moderate when our savings are just a drop in some billionaire's bucket? Now there is a strange thing to be thinking about at Christmas.