Posted by bensor on Monday, 31 December 2012 in Sustainable Development 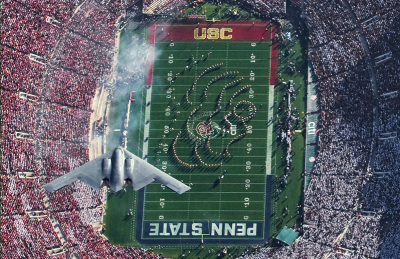 As is the case with most sports, college football–not to mention bowl games–and sustainability do not intuitively go in the same sentence. The long-term sustainability of many of these games themselves come into question considering how many of them there are; 6-6 teams have an opportunity to play in showcases such as the Beef-o-Brady’s Bowl. Then, you have the dubious “charity” distinction and questions about whether these “nonprofits” contribute to local communities as much as they say; the nonprofit organizations that organized 24 bowl games two years ago donated less than two percent of total proceeds to charity. Most bowl games claim to do a significant amount of community work, though year to year such activities are spotty–take the Pinstripe Bowl (really?), for example. For now, the low-hanging fruit, recycling, is the norm at these events for now.

Nevertheless, some college football bowls are edging towards sustainability and social responsibility. Here are a few highlights for this never-ending bowl season:

Chick-fil-A Bowl: Now here’s a “sustainable” bowl that may turn some heads. Some may raise their eyebrows at the sponsor’s dubious environmental sustainability record or stance on gay marriage, but the annual game in Atlanta makes the biggest effort towards game day sustainability. The host committee now co-hosts an annual conference with Waste Management to share ideas how college athletic programs can develop sustainability goals and solutions. Over 700 recycling bins are plunked throughout the Georgia Dome and surrounding areas on the day the game is played. This year, green energy from Georgia Power will power the stadium lights, and Atlanta-based Home Depot will also distribute coupons for CFLs.

Rose Bowl: All those tree branches and flower petals festooned on those floats have got to go somewhere. Could Miracle-Gro come to the rescue? So far, the new sponsorship is only focused on community parks, but there is some chatter about improving the game’s and parade’s environmental sustainability. This year, the parade’s grand marshall and game coin-flipper is Jane Goodall, who hopes her presence this year encourages the event’s organizing committee to take environmental stewardship more seriously.

Kraft Fight Hunger Bowl: Formerly the Emerald Bowl and played on a baseball field, the Kraft Hunger Bowl is the most socially conscious bowl. For every ticket purchased to watch the game at AT&T Park, Kraft fronts money for meals at three local Bay Area charities. The organizing committee estimates it has funded over 200,000 meals for the Bay Area’s hungry. Each team preps and serves meals to San Francisco’s poor on Christmas Day and, during the bowl week, visits local charities. Spectators also have the option of donating money to the San Francisco Food Bank when they purchase their tickets.