Posted by bensor on Sunday, 06 January 2013 in Water Conservation

Water is supplied only to rich people, allege residents 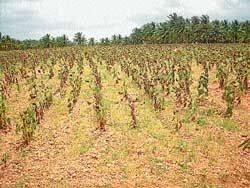 The main reason for the problem is depleting water level in the borewell located near Veda Pumphouse, which is the source of water to the town. Though the town has a few more borewells, people are alleging that the water is supplied only to the houses of the rich. The residents said “we have staged protests several times in the past. We had even gheraoed the TMC office. However, the protests did not serve any purpose.”

“Water is expensive in Kadur. One has to pay Rs 500 to get water in a tanker. We are poor and cannot afford to purchase water from tankers and are depending on water supplied by the TMC,” they added

People selling water are minting money by taking advantage of the situation. The people allege that the TMC failed to take precautionary measures to solve acute shortage of water.

Apart from the drinking water problem, the town’s roads are also in bad shape and drains have not been completed. Stench emanates from stagnated sewage. Despite the government releasing crores of rupee for various development activities, funds have not been utilised properly in Kadur.

Though roads were asphalted some five months ago, in many places, the top surface has chipped off. Riding on these roads is a difficult task for vehicle users. The people suspect that councillors and officials are hand in glove with the contractors.

The only ray of hope for the people is Shuddha Ganga unit opened by Sri Kshetra Dharmasthala Rural Development Project, which provides 20 litres water for Rs 2. The residents are demanding for opening a few more such units, to help the poor in availing potable water.

Linking Madagada Kere to Galihalli Kere and Chikkangala Kere and supplying water to twin towns of Birur and Kadur would help in solving the water problem to some extent, said the residents.