Posted by britt on Saturday, 12 January 2013 in Biofuels 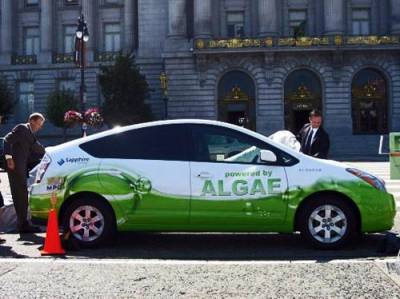 In 2006, rising oil prices prompted molecular biologist Stephen Mayfield to shift his research from algae’s medical uses to turning the green goo into green crude. His work prompted a handful of biotech entrepreneurs to found Sapphire Energy in San Diego in 2007 in the hope of producing the sustainable fuel commercially.

Gas prices have continued to climb since then, and the swift jump above $5 a gallon in some parts of California last week “is a reminder of the vulnerability Americans face, due to volatile markets and a continued reliance on finite sources of crude oil,” says Tim Zenk, Sapphire’s vice president for corporate affairs.

The 150-employee company, backed by more than $350 million in public and private funds, is a leader in a rapidly growing cluster of 40 biofuels ventures around the city. The scientific breakthroughs and engineering expertise at research powerhouses such as the University of California, San Diego, the Scripps Research Institute, and the Salk Institute for Biological Studies are part of the cluster’s allure. BP (BP) established its Biofuels Global Technology Centre there in 2010, says BP spokesman Matt Hartwig, attracting “leading engineers and scientists especially from the local San Diego biotechnology community.”

That tight-knit community is turning San Diego into a destination for entrepreneurs betting on alternative fuels made from nonfood sources such as algae and jatropha. “San Diego has developed as the Mecca of algae technology development, as well as a model community for the cleantech movement,” David Schwartz, editor and publisher of AlgaeIndustryMagazine.com, writes in an e-mail. “This is largely due to a remarkable convergence of … resources and brain trust [that] has resulted in the development of pioneering companies.”

Martin Sabarsky, president and chief executive of Cellana, a 25-employee company founded in 2004 to commercialize marine microalgae, says “it’s no surprise that San Diego should be a place where [biofuels research] companies are headquartered and dollars are flowing.” Although Cellana’s research and production are based in Hawaii, Sabarsky found it imperative for the company to locate in San Diego. “The breadth of companies attracts top talent and venture capital to the region,” says Jennifer Jamall, communications director for local trade group CleanTECH San Diego. “Biofuels startups benefit greatly from being tightly clustered in San Diego.”

Local and state government is supportive, too, because San Diego’s biofuels cluster “represents a significant opportunity to expand the region’s research corridor to a new field in technological discovery and entrepreneurial business development,” Jamall says. “Policy makers in California have singled out biofuels discovery, development, and commercialization, among other cleantech ventures, as a promising sector for innovation and job creation statewide.”

Algal biofuels research generated $80.9 million in economic activity in the region last year and employed 466, up from 215 in 2009, according to a study (pdf) from the San Diego Association of Governments. A $4 million grant from the California Department of Labor has helped meet growing industry demand for skilled labor by training biofuel workers and job seekers through local universities, community colleges, and extension programs.

Keen to avoid corn-based ethanol’s chief disadvantage, of diverting costly food crops away from the global food supply, entrepreneurs in the cluster are trying to circumvent their own problems. Kirk Haney, president and CEO of SG Biofuels, has staked his 60-employee company on a tropical shrub called jatropha curcas, which produces oil that in August 2011 successfully powered a Boeing 777 Aeromexico test flight from Mexico City to Madrid. “I raised $1.3 million three days before the market meltdown, and it took me a year to raise an additional $750,000,” Haney says. In the worst of times, some of his employees shifted to part-time jobs and others took compensation in company equity rather than cash, he says.

Jatropha production has had its share of false starts, with several industry bankruptcies and disappointing yields in field trials. Haney says SG Biofuels has solved those problems with hybrid crops that produce better yields with less water. A Bloomberg New Energy Finance report released in February says that jatropha-derived aircraft fuel could be competitive within five years.

Sapphire’s scientists have conquered many of the early obstacles to commercial algae production, says Zenk, including growing algae on a commercial scale with salt water and developing a cost-effective, nonpolluting extraction process. Improving yields and protecting crops from pests and disease are ongoing challenges, he says. He estimates that by 2015 the company’s technology will be sophisticated enough to produce the fuel economically on an industrial scale. The Bloomberg report predicts that “large-scale, biofuel-producing algae farms will not appear this decade.”

The biofuel entrepreneurs agree they are not going to discover one magic fuel. “We already found it, and it’s petroleum,” says Mike Lewis, co-owner of 10-year-old alternative fuels distributor Pearson Fuels in San Diego. “It’s absolutely mind-boggling how efficient it is. I don’t think we’ll ever find something that has as much widespread utility.” But petroleum’s political and environmental drawbacks mean that a variety of sustainable alternatives will eventually have to replace it, he adds.

Haney agrees: “I’m very bullish on my peers. I hope they are wildly successful, because we need a multi-pronged attack to get this technology to scale.”

This email address is being protected from spambots. You need JavaScript enabled to view it. is a Los Angeles-based writer who covers entrepreneurship and small-business issues.
Tagged in: algae algae fuel algae technology Biofuels San Diego Sapphire Energy