Posted by Aaron on Tuesday, 22 January 2013 in Wildlife Conservation

Killing Whales is War Against Nature 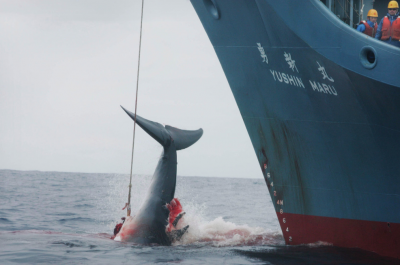 Four Japanese whale-killing, factory ships armed with coast guards and grenade-tipped harpoons are within hours of entering a demilitarized zone and the international Great Southern Ocean Sanctuary. The bloody "War Against Nature" is set to rage.

In a world in which the environment is being marauded, the Sea Shepherd Conservation Society is standing up and upholding the law to protect the great whales in an international sanctuary. Enough blood has been shed; in the 20th century humans slaughtered 1.5 million whales.

Four Sea Shepherd boats -- Steve Irwin, Bob Barker, Sam Simon and Brigette Bardot -- are being led this year by former Australian Greens leader and environmental champion Dr. Bob Brown and former Australian Senator and former Environment Minister Ian Campbell. They have taken over from Sea Shepherd founder Captain Paul Watson who is restricted by a U.S. Court of Appeals preventing him from going within 500 yards of whale-killing ships. The Aussie leaders and 120 crew representing 24 nations (including Japan) are on a bold mission -- Operation Zero Tolerance: Zero Cruelty: Zero Kills.

It's the ninth year of the Sea Shepherd campaign to protect the great whales in the Southern Ocean Sanctuary. This year, in addition to a helicopter, two long-range aerial drones (donated by Bay Shore Recycling Corp, N.J.) are being used to quickly locate the Japanese fleet as they enter the sanctuary. The quicker the Sea Shepherd find the whalers, the quicker they can get on their tail; the sooner they can prevent any whale slaughtering.

As soon as Sea Shepherd discovers the whalers they closely follow the large fish-factory boats, blocking the stern-slipway. If the Japanese can't load whales -- they can't kill them. It's a very effective tactic -- in 2012 the Japanese only took 26 percent of their kill quota and even lower in 2011 at 17 percent. 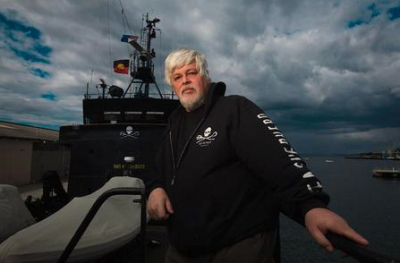 The fiscal losses of the Institute of Cetacean Research (ICR a Japanese government agency) in 2012 were$20.5 million. After a relentless nine-year Sea Shepherd campaign the whalers have lost $100 million. Japan's government-subsidized whaling program is indeed in strife. In 2011, the Japanese whaling industry siphoned $29 million from the March 2011 (tsunami) Earthquake Recovery Fund.

The Japanese 2013 quota of 935 minke whales, 50 fin whales and 50 humpback whales is set for lethal-scientific research, yet little (if any) peer-reviewed whale research has been released in the past quarter century by ICR. (The Japanese call a harpoon-tipped grenade that misses a whale -- a sampling error.) Instead the whale meat is sold into the marketplace.

The absurdity here is that Japanese are no longer buying the whale meat. In fact, in 2008 several tons of unsold whale meat was placed in cold storage.

Take a moment to read this emotive story about why Paul Watson has dedicated his life to saving whales, dolphins, sea turtles, sharks and life within our oceans. About a year ago my Chesapeake Bay retriever and I spent a half an hour, in a tiny dingy, feet away from a majestic blue whale -- an awesome experience.

"The War Against Nature" and the great whales must end after this 2013 season. No country has the right of entitlement to destroy the ocean -- our commons and our birthright -- especially in an international sanctuary.

Watson is correct: If we lose the sea turtles, dolphins, whales, sharks and other sea creatures we lose the web of life in the oceans. Humans cannot exist without the rich array of diversity that makes up our great oceans.