Posted by Aaron on Tuesday, 29 January 2013 in Air Quality

Can you Afford Clean Air? 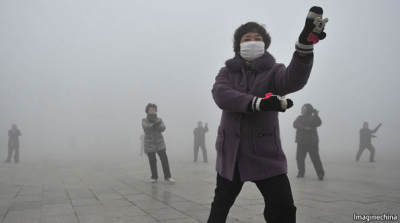 This is a story that shows how deliriously capitalist China has become (for good and bad). Rapid industrialisation has covered northern China in a dense pea soup of toxic chemicals. In the past, the old fashioned communist solution might have been either to ignore the problem or, if people insist on dying, organise the entire country in a “popular war on bourgeois toxins.” But in a post-Mao order, how does China’s elite deal with pollution? Yuppie consumerism.

Chen Guangbiao, an entrepreneur worth $740 million (how, why, and would he like to meet my daughters?) has started selling cans of fresh air for people to crack open and breath in. They go for 5 yuan each and, according to one report, they come with atmospheric flavours including “pristine Tibet, post-industrial Taiwan and revolutionary Yan'an.” Presumably the “pristine Tibet” can smells ever so slightly of gunpowder.

The story tells us two things. First, the price of China’s rapid development is that it now has to cope with the same problems that beset the already developed world. It’s good, because it means people are getting richer. But it’s bad because it means the country is experiencing what London went through in the 1950s as the industrial landscape coughs up its blackened lungs. According to the BBC, Beijing has reported air quality readings that show pollutants present at 20 times the recommended limits; visibility has been reduced and residents have been advised to stay indoors. Prosperity creates its own kinds of poverty.

But the story also suggests that the response of China’s new middle class is to ape the indulgent lifestyle consumerism of their Western counterparts. The cans of air are partly being sold as a way of promoting environmentalism, although no one has pointed out that the manufacture and disposal of all the cans used in the process will, itself, contribute towards China’s pollution. But Chen also seems deadly serious about the profitability of selling cans of basically nothing to his countrymen. In an interview last year, he explained the process for canning the air thus:

Chen said the air is put into pull-tag cans he invented, with a chip in each can. The air is not compressed – he said his staff need only swing their hands three times to push the air into the can. When there is enough air, the chip will make the cap close automatically.

So, in short, some bloke stands on a mountain, waves a can about, takes it to market and sells it for money. And aside from fooling the buyer in to thinking that they're helping to keep China clean, what are the benefits? According to Chen, “Open the can and three deep breaths will allow you to have a good mood and a clear mind.” In the West, such vague nonsense would probably get you hauled before the advertising standards people. But China is still in the early, naive stages of consumerism. We've all been there. It won’t be long before we see Clive Sinclair’s C5 buzzing through Beijing’s bust streets, and dreamcatchers hanging in Tiananmen Square.