The Environment and Famine 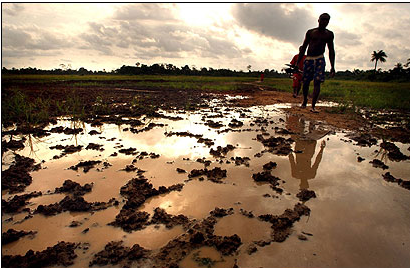 Humanity faces serious, highly interconnected environmental problems, including much-discussed challenges such as climate change, as well as the equally or more serious threat to the survival of organisms that support our lives by providing critical ecosystem services such as crop pollination and agricultural pest control. We face numerous other threats as well: the spread of toxic synthetic chemicals worldwide, vast epidemics, and a dramatic decline in the quality and accessibility of mineral resources, water and soils. Resource wars are already with us; if a “small” nuclear resource war erupted between, say, India and Pakistan, we now know that the war alone would likely end civilization. But our guess is that the most serious threat to global sustainability in the next few decades will be one on which there is widespread agreement: the growing difficulty of avoiding large-scale famines. As the 2013 World Economic Forum Report put it: “Global food and nutrition security is a major global concern as the world prepares to feed a growing population on a dwindling resource base, in an era of increased volatility and uncertainty.” Indeed, the report notes that more than “870 million people are now hungry, and more are at risk from climate events and price spikes.” Thus, measures to “improve food security have never been more urgently needed.” In fact, virtually all such warnings, in our view, underestimate the food problem. For example, micronutrient deficiencies may afflict as many as 2 billion additional people. And many other sources of vulnerability are underrated: the potential impact of climate disruption on farming and fisheries; how a shift away from fossil-fuel consumption will impair food production; how agriculture itself, a major emitter of greenhouse gases, accelerates climate change; and the consequences of groundwater overpumping and the progressive deterioration of soils. Indeed, agriculture is also a leading cause of biodiversity loss – and thus loss of ecosystem services supplied to farming and other human enterprises – as well as a principal source of global toxification. Perhaps most important, virtually all analyses assume the human population will grow by 2.5 billion people by 2050, rather than seeking ways to reduce that number. The optimism of many analysts concerning our ability to feed these additional billions is quite disturbing, given that millions annually die of malnutrition already, and many more are so malnourished as to have degraded lives. If it will be so easy to feed a population 35 percent larger, why isn’t everyone well nourished today? Five steps are typically recommended to solve the food problem: stop increasing land for agriculture (to preserve natural ecosystem services); raise yields where possible; increase the efficiency of fertilizer, water and energy; become more vegetarian; and reduce food wastage. To this one could add: stop wrecking the oceans; greatly enlarge investment in agricultural research and development; and move proper nutrition for all to the top of the global policy agenda. All of these steps require long-recommended changes in human behavior. Most people fail to recognize the growing urgency of adopting them because they do not understand the agricultural system and its complex, nonlinear (disproportionate) connections to the mechanisms driving environmental deterioration. All inputs needed to feed each additional person will, on average, come from scarcer, poorer and more distant sources, disproportionately more energy will be used, and disproportionately more greenhouse gases will be generated. More than a millennium of changing temperature and precipitation patterns, all vital to crop production, has put the planet on a path toward increasingly severe storms, droughts, and floods. Thus, maintaining – let alone expanding – food production will be increasingly difficult. A popular movement is needed to direct cultural awareness toward providing the “foresight intelligence” and the agricultural, environmental and demographic planning that markets cannot supply. Only then could we begin to address seriously the population disaster – consider the nutritional-health benefits of humanely ending population growth well before we reach 9 billion people and beginning a gradual decline thereafter. The best way, in our view, to achieve such population shrinkage is to give full rights and opportunities to women, and to make modern contraception and backup abortion accessible to sexually active people. While the degree to which these steps would reduce total fertility rates is a matter of controversy, they would deliver significant social and economic benefits by making huge reservoirs of brain power available to solve our problems, while saving hundreds of thousands of lives by reducing the number of unsafe abortions. Can humanity avoid a starvation-driven collapse? Yes, we can – though we currently put the odds at just 10 percent. As dismal as that sounds, we believe that, for the benefit of future generations, it is worth struggling to make it 11 percent. One of our most distinguished colleagues, biogeographer and energy expert James Brown of the University of New Mexico, disagrees. He puts the odds of sustaining human civilization at 1 percent, but thinks that it’s worth trying to increase it to 1.1 percent. Developing foresight intelligence and mobilizing civil society for sustainability are central goals of the Millennium Alliance for Humanity and the Biosphere, based at Stanford University. Those who join the MAHB join the best of global civil society in the fight to avoid the end of civilization.