Posted by amir on Sunday, 07 October 2012 in Wildlife Conservation

Stop the Trade in Bear Bile! 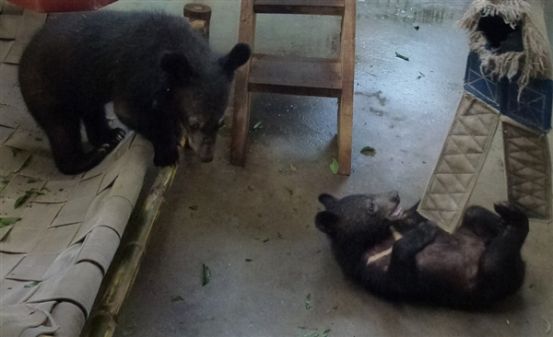 Two brother bear cubs rescued from suspected smugglers in Vietnam have become poster children for a campaign against the use of capturing and harvesting bears for their bile.

The two men arrested said "they bought the cubs for $1,500" and were "going to sell them for a much higher price," most likely to a farm that harvests bear bile, Tuan Bendixsen, the Vietnam director for the nonprofit charity Animals Asia, told NBC News.
"To get the cubs they would have to kill the mother," Bendixsen added, "and the mother's body parts would be sold" for the trade in purported medicinal cures from bear parts. The body parts most in demand are gallbladders and paws.

The bears were found by police inspecting a basket in a town near the northern border with China. Across that border are multiple bile farms, Animals Asia said.

The Asiatic black bears, also known as moon bears, were given the nicknames Ricky and Joey.
Releasing the bears back into the wild is not an option, Bendixsen said, "because we don't know where they came from and since they were taken from their mother at such a young age they can't look after themselves in the wild."
Animals Asia estimates that more than 10,000 bears are kept on bile farms in China, and around 2,400 in Vietnam.