Food According to Drought 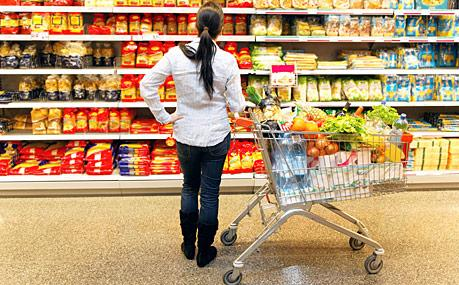 By Codi Yeager-Kozacek
Circle of Blue

When it became clear last August that crippling heat and dryness would severely curtail U.S. corn production, prices for the grain shot to record highs. Now, eight months later, consumers in the United States are looking at a 3 to 4 percent inflation rate for food prices in 2013, according to the U.S. Department of Agriculture (USDA).

“This forecast represents an annual increase that is above the historical average for both indexes,” said the USDA’s latest Food Price Outlook, released March 25. The agency measures an index for food price inflation overall, as well as an index for ‘food-at-home,’ or grocery store, price inflation. “Inflation is expected to remain strong, especially in the first half of 2013, for most animal-based food products due to higher feed prices.”

In any given year with normal economic conditions — no drought, no recession — the country typically sees an annual rate of food inflation between 2.5 and 3.5 percent. Though this may not seem much different than the rates expected this year, USDA analyst Ricky Volpe warns against underestimating the effects.

“It is only 0.5 percent of a difference. But I don’t mean to marginalize that, because this is coming at a particularly hard time for consumers and for food prices,” Volpe told Circle of Blue. “Food prices are already very high, and these increases are above and beyond that.”

“Consumers are not getting a break, and that is due to the drought.”

Food inflation rose dramatically from 2007 to 2008 — the same year that food riots broke out across the globe — but dropped back down in 2009 and 2010, due to the recession. Rates spiked again in 2011, and they would have been above normal in 2012 if not for deflation of fruit and vegetable prices, Volpe explained.

“Consumers are not getting a break, and that is due to the drought,” he said.

In grocery stores, prices for processed products like cereal, soup, and condiments are not expected to go up until the second half of 2013, while prices for animal-based foods like meat, eggs, and milk are already on the rise.

“Corn is part of most products, in some shape or form. But if you look on a cereal box, or any other box, and see corn in a list of ingredients, it means that food had processing costs and packaging costs and advertising costs — these mitigate the transmission of corn prices,” Volpe said. “If you look at foods like meat and eggs, you won’t see corn listed as an ingredient. But the animals that produce these foods were fed using field corn, and it is one of the biggest inputs for these foods.”

More To It
Something more than last summer’s drought is at play behind the high meat costs. Amid growing global demand for meat, U.S. livestock herds have been reduced to historically low levels over the past five years as consecutive droughts and higher prices for feed and fuel have made the animals too costly to keep.

“Beef and veal were almost unique in that they trudged up and up way before we would see effects of the drought. This is a longer term, bigger problem,” Volpe said. “In normal conditions, if we were to take the drought out of the story, this situation would be remedying itself already, but it’s not. It’s actually getting worse, and we are seeing [herds] contract, because there was another liquidation and draw down in 2012.”

Currently, the USDA food price inflation forecasts do not take into account the possibility of another severe drought this summer. With dry conditions persisting across many of the grain-producing Plains states, however, the numbers may change as the growing season progresses this summer, and many U.S. farmers are already planning to plant more water-efficient crops.