Posted by GreenDog on Wednesday, 17 April 2013 in Energy Efficiency

The True Costs of Energy 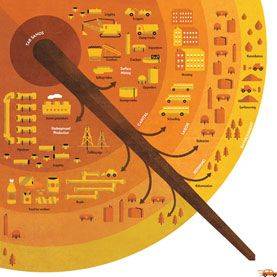 One reason we use energy so lavishly today is that the price of energy does not include all of the social costs of producing it.
- President Richard Nixon, 1971

Politics have turned upside down. As the quote from President Nixon reminds us, protecting the environment was once an issue on which Republicans led the way. Is there a way back to bipartisanship on protecting the future for our children and grandchildren? Yes, but it requires an attempt to quantify the costs alluded to in Nixon’s quote.

Before we get to the numbers, however, let’s note a rather striking irony of the current politics. Although there is room for debate on the total costs of using fossil fuels, no one disputes that at least some of the costs are real. Given that fact, there are two basic ways in which those societal costs could be borne:

(1)  We could socialize the costs across all of society by having them borne by all taxpayers.

(2)  We could charge individuals who use the fuels in proportion to their use, by adding a tax on the fuel cost.

Note that option (1) is essentially socialism, while option (2) reflects individual responsibility. You can probably see the irony: By and large, Republicans favor the socialism option and Democrats favor the individual responsibility option — the opposite of the positions we expect from the two parties in most other political debates. This fact suggests an opening for a new bipartisanship on the environment, so now let’s look at a few numbers, which will make the bipartisan case even stronger.

1.     Health costs of air pollution. We cannot determine these costs exactly, because almost any health problem that we might attribute to pollution might also have had some other cause; for example, it’s almost impossible to determine whether pollution or something else caused any particular asthma attack. Nevertheless, the cost issue can be studied statistically, and if there are more asthma attacks in places with more polluted air, then we can reasonably assign the costs for treating these excess attacks as a cost of pollution. In looking at such issues in detail, the National Academy of Sciences estimated the direct health costs of air pollution in the United States at a minimum of about $120 billion per year. The reason this is a minimum is that the study looked only at those health effects had measureable costs in medical treatment. The study did not, for example, consider the cost of lost productivity by workers staying home but not seeking treatment, or the lost wages of people who died prematurely due to health problems worsened by air pollution.

2.     Military costs of securing our oil supply. Because most of our oil is imported, we need to ensure that the supply and the shipping routes are secure against potential aggressors. Again, there will be uncertainty in deciding what fraction of our military costs should be assigned to protecting oil, but numerous studies agree remarkably well in putting the costs of oil security at a minimum of $50 billion to $100 billion per year. These estimates are a minimum because they include only the military costs that are directly connected to oil. They do not, for example, include any of the costs of the Iraq or Afghanistan wars.

Note that the health and security costs alone add up to a minimum total of between about $170 and $220 billion per year. To put this in perspective, let’s suppose that we decided to collect this amount through a gasoline tax. A quick Web search will tell you that we consume about 140 billion gallons of gasoline per year in the United States. Dividing the total cost by the total gasoline usage, you’ll find that these minimum health and security costs would add somewhere between about $1.20 to $1.60 per gallon to the cost of gasoline. Of course, it would make more sense to use a carbon tax that applies to all fossil fuels than a gasoline tax alone, since gasoline is only one use of fossil fuels.

This high cost is astonishing to most people, yet the true costs that we currently socialize are undoubtedly much higher. For example, consider the costs in dollars and lives of oil imports through which we effectively transfer hundreds of billions of dollars to nations that don’t share our values. Without oil income, does anyone seriously believe that Iran would be on the verge of developing nuclear weapons, that Hugo Chavez would have maintained his grip on power in Venezuela, or that we would be supporting a regime in Saudi Arabia that doesn’t even allow women to drive? And don’t forget that most of Al Queda’s money is ultimately oil money, as is most of the money going to other terrorist groups such as Hamas and Hezbollah. We also have not yet accounted for any of the environmental costs fossil fuel use, or for the future economic costs of global warming.

Indeed, my own opinion is that the true costs of fossil fuels could easily be ten times the $170 to $220 billion per year minimum we found for health and security, but let’s stick with the minimum numbers that everyone agrees on. With that in mind, let’s note three more facts that should appeal to members of both major political parties:

1.     Especially in a time of budget austerity, it makes more sense to ask users to pay the costs of fossil fuels than to continue our current socialism in which we distribute the costs across taxpayers.

2.     A carbon tax that brings in a minimum of $170 to $220 billion per year could go a long way toward helping with our budgetary problems. Indeed, a simple compromise that ought to appeal to both parties would be to take this revenue and split it one-third to reducing income tax rates, one-third to deficit reduction, and on-third to investments in science and technology that will help us transition away from fossil fuels.

3.     No one likes subsidies, and the socialized costs of fossil fuels are effectively a subsidy. Adding the carbon tax would reduce this subsidy, thereby leveling the playing field and allowing the free market to determine which energy sources will make more economic sense for the future.

The mathematics is clear: Fossil fuels are costing us far more than we currently pay for them, a fact that is hurting our budget, hurting our environment, and hurting the ability of other energy sources to compete against fossil fuels in a free market. So no matter what your political persuasion, it should be possible for us all to agree on the simple and obvious solution. The time for a carbon tax is now.

Note: For readers interested in more detail on the numbers I’ve cited above, please see Chapter 7 (“Energy Math”) in my book Math for Life (http://math-for-life.com).