Posted by plantitfilm on Saturday, 11 May 2013 in Transportation 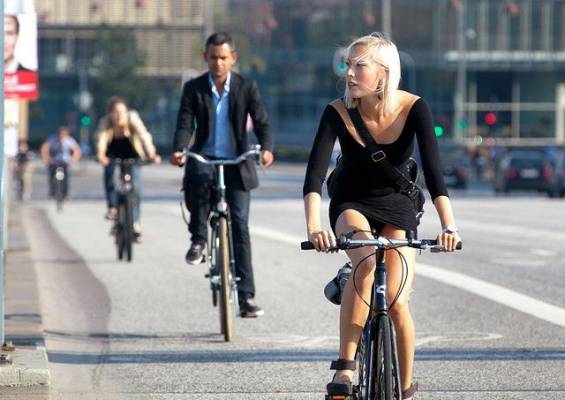 Not many people can say they cross a mountain range on their way to work — not on their own steam, anyway. But Annelie Rugg gets to campus from the West San Fernando Valley most days by bicycle.

Rugg, who is director and humanities CIO for the Center for Digital Humanities, is one of thousands of commuters helping to relieve UCLA's high traffic density by using alternative forms of transportation. UCLA's 53 percent drive-alone rate is much better than the 72 percent countywide average. Four percent of UCLA's commuting students, faculty and staff bike to campus. Thanks to UCLA Events and Transportation’s efforts, the campus offers plenty of resources and events for Bruin cyclists, including Bike to Campus Week May 13–17, and UCLA has earned distinction as a “bicycle friendly university” from the League of American Bicyclists.

Rugg started her career at UCLA as a graduate student in 1994 and has been on staff since 2011. Not once in all these years has she had a UCLA parking pass. Cycling the 22 miles from her home in the West Valley near Topanga Canyon Boulevard and the 101 takes Rugg about two and a half hours. She got off her bike long enough to talk with Christelle Nahas for UCLA Today:

My typical commute is to ride all the way in by bicycle. Going home, I combine bicycling with the LADOT Commuter Express bus. I bus to Encino and then get off and ride my bicycle back home, about 10 miles.

You’ve always biked? You never had a parking permit?

Never had a parking permit. And I am a cyclist, so this made sense. Initially, I was a graduate student and lived in West L.A.  I would take the bus when it rained. When I moved to the Valley in 1999, I was bike racing, and on training rides I cultivated the routes I now use to campus.

Do you feel safe out there with the car commuters?

For the most part, drivers are really great. They hang back until it’s clear to go and give me room so I don’t feel impinged upon. There’s the occasional person who’s obviously not having a good morning — it seems to always be in the morning (laughs) — and they’ll honk. I don’t think drivers realize how loud horns are when you’re outside the car. It’s startling. There have been very few occasions where someone’s been overly aggressive. On occasion, someone comes really close, but I think it’s just that they don’t judge right, and/or they figured that I was comfortable with inches of distance rather than feet.