Posted by plantitfilm on Thursday, 16 May 2013 in Food

To save the planet, chow down on a caterpillar 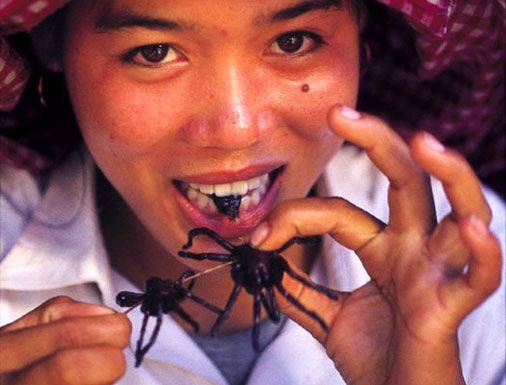 It's cricket crumble for dinner. We should all be eating more insects, because doing so is better for the planet than tucking into conventional meat like beef.

In a new report entitled "Edible Insects: Future prospects for food and feed security", the UN Food and Agriculture Organization (FAO) says that farmed insects could make a big contribution to our diets – they contain lots of protein and are cheap to produce. They also have major environmental benefits.

Conventional meat is not an efficient way to get nutrients because animals must be fed on crops, and much of the energy that goes into cultivating the crops is wasted. To produce 1 kilogram of beef, for example, you need 10 kg of feed, whereas 1 kg of crickets requires just 1.7 kg. What's more, 80 per cent of a cricket is edible compared with just 40 per cent of a cow.

The FAO therefore calculates that crickets are 12 times as efficient at converting feed into meat as cows. By farming insects, we could get more meat from the same amount of grain, use less land for agriculture and cut pollution.

The problem is that most people in the developed world are reluctant to eat creepy-crawlies. "On paper, insects are fantastic, but on a plate most people won't touch them," says Aran Dasan of Ento, a London company specialising in insect-based foods. "I don't think we can sell insects based on their sustainability," Dasan says. Instead Ento targets foodies with bite-sized morsels for sharing.