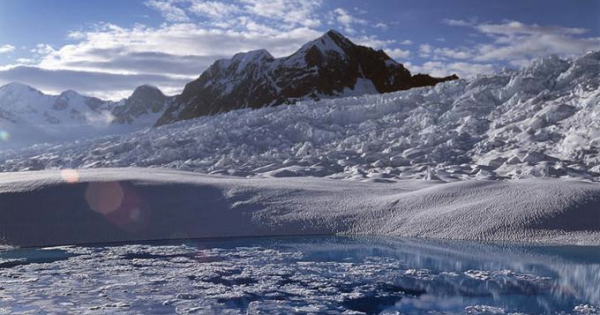 While 99 percent of Earth’s land ice is locked up in the Greenland and Antarctic ice sheets, the remaining ice in the world’s glaciers contributed just as much to sea rise as the two ice sheets combined from 2003 to 2009, says a new study led by Clark University and involving the University Colorado Boulder.

The new research found that all glacial regions lost mass from 2003 to 2009, with the biggest ice losses occurring in Arctic Canada, Alaska, coastal Greenland, the southern Andes and the Himalayas. The glaciers outside of the Greenland and Antarctic sheets lost an average of roughly 260 billion metric tons of ice annually during the study period, causing the oceans to rise 0.03 inches, or about 0.7 millimeters per year.

The study compared traditional ground measurements to satellite data from NASA’s Ice, Cloud and Land Elevation Satellite, or ICESat, and the Gravity Recovery and Climate Experiment, or GRACE, missions to estimate ice loss for glaciers in all regions of the planet.

“For the first time, we’ve been able to very precisely constrain how much these glaciers as a whole are contributing to sea rise,” said geography Assistant Professor Alex Gardner of Clark University in Worcester, Mass., lead study author. “These smaller ice bodies are currently losing about as much mass as the ice sheets.”

A paper on the subject is being published in the May 17 issue of the journal Science.

“Because the global glacier ice mass is relatively small in comparison with the huge ice sheets covering Greenland and Antarctica, people tend to not worry about it,” said CU-Boulder Professor Tad Pfeffer, a study co-author.  "But it’s like a little bucket with a huge hole in the bottom: it may not last for very long, just a century or two, but while there’s ice in those glaciers, it’s a major contributor to sea level rise,” said Pfeffer, a glaciologist at CU-Boulder’s Institute of Arctic and Alpine Research

GRACE does not have a fine enough resolution and ICESat does not have sufficient sampling density to study small glaciers, but mass change estimates by the two satellite systems for large glaciated regions agree well, the scientists concluded.

“Because the two satellite techniques, ICESat and GRACE, are subject to completely different types of errors, the fact that their results are in such good agreement gives us increased confidence in those results,” said CU-Boulder physics Professor John Wahr, a study co-author and fellow at the university’s Cooperative Institute for Research in Environmental Sciences.

Ground-based estimates of glacier mass changes include measurements along a line from a glacier’s summit to its edge, which are extrapolated over a glacier’s entire area.  Such measurements, while fairly accurate for individual glaciers, tend to cause scientists to overestimate ice loss when extrapolated over larger regions, including individual mountain ranges, according to the team.

The study involved 16 researchers from 10 countries. In addition to Clark University and CU-Boulder, major research contributions came from the University of Michigan, the Scripps Institution of Oceanography in San Diego, Trent University in Ontario, Canada, and the University of Alaska Fairbanks.

Built by Ball Aerospace & Technologies in Boulder, NASA’s ICESat satellite was successfully operated from the CU-Boulder campus by a team made up primarily of undergraduates from its launch in 2003 to its demise in 2009 when the science payload failed. The students participated in the unusual decommissioning of a functioning satellite in 2010, bringing the craft into Earth re-entry to burn up. ICESat’s successor, ICESat-2, is slated for launch in 2016 by NASA.