Posted by Angel on Saturday, 06 October 2012 in Arts and Entertainment 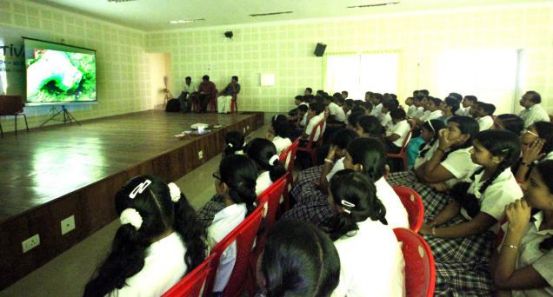 Minister for Cultural Affairs K.C. Joseph on Thursday inaugurated the Green Film Festival which started with the screening of one-minute short film ‘Recycle.’

Speaking at the function, the Minister said the State was facing a lot of environment-related problems such as waste management and its disposal.

‘‘Rain-borne diseases are on the rise mainly due to accumulation of waste. The issue can be solved only with the support of the public. Every household should adopt source-level waste management strategies,’’ he said. According to him, such festivals will help bring about a change in the attitude of the student community towards environmental issues.

The film festival is jointly organised by the Centre for Gandhian Studies, University of Kerala, Kerala State Bio-Diversity Board, and I&PRD.

The first day screening, however, was marred by poor infrastructure. In the forenoon session, films were shown on a mini projector, which had an incorrect screen size set. The screen was also partially damaged.

According to coordinator J.M. Rahim, there are some glitches in the planning and arrangement of the screening units.

‘‘The mistake has been rectified and we have arranged for high quality projectors from the Kerala Chalachitra Academy for tomorrow’s screening,’’ he said.

Films such as ‘Shelter,’ ‘Bommerang,’ and ‘Ullkazhcha’ were screened on the first day. The festival also had its share of international entries, including ‘Garbage Licence,’ ‘Don’t Rubbish It,’ and ‘Silence Witness.’

Tomorrow's screening will begin with the second part of ‘Ullkazhacha,' which talks about one of the most important environmental problems in the State — Waste disposal and waste management.

Following this, films such as ‘Earth,’ ‘Kanivinte Mozhi,’ ‘Happy Planet,’ ‘Sahyadri,’ ‘Chitrashalabangal,’ and ‘Once Upon A Time’ will be screened.

The festival will conclude with a Green Open Forum, which will be held at 3 p.m. on June 23.