Posted by Panda on Monday, 10 June 2013 in Wildlife Conservation 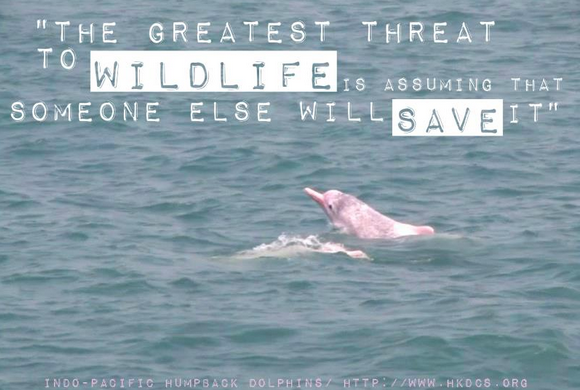 It is difficult not to be amazed by the diversity of life forms when you venture into a tropical rainforest or dive into a coral reef. Locally, a trip to a mudflat, such as at Lung Mei at low spring tide, or to the Deep Bay wetlands in winter equally yields wonders.

Some 1.2 million species have been found and named by biologists but incredibly, it has been estimated that there are 8.7 million species sharing the earth with us. Clearly, our knowledge of biodiversity is limited, with some 86 per cent of the life on earth still awaiting our discovery.

Ecologists are tasked to study, understand and sometime even predict - for example, in impact assessments - the complex relationships among plants, animals, fungi, bacteria, and the like, and the environment. This is an awesome task and the reason why ecologists often cannot give clear, definite answers.

Ecology is the cornerstone of conserving species because we need to understand their requirements and their interaction with other species and the environment before we can ensure their survival. This professional discipline provides critical information on the state of the environment and allows decision-makers to make informed choices on what development could be carried out and where it should be sited, in order to avoid a severe impact on our life-supporting system.

In recent years, however, the influence of ecology in major decision-making processes on development in Hong Kong seems to have weakened.

As an example, take the Chinese white dolphin, an apex predator and an indicator of the health of the marine environment. We have long-term data on the population in its primary habitats in Hong Kong waters based on Agriculture, Fisheries and Conservation Department-commissioned monitoring surveys. These expert surveys reveal a significant decline in dolphin numbers, from an estimated population of 158 in 2003 to 78 in 2011, a 50 per cent drop in less than 10 years.

There is a certain bitter irony when observing the popularity of this intelligent species among the Hong Kong public, when this is balanced with the fact that our development and other demands put us in direct competition with the dolphins for increasingly scarce resources and space. This competition has resulted in numerous threats to the dolphins.

Ever-increasing reclamation is the most significant threat right now. This is made worse by dredging, dumping water and noise pollution and a rise in vessel traffic - especially high-speed vessels. The dramatic population decline indicates that these threats have not been addressed effectively. The 17-year government-commissioned dolphin monitoring programme provides valuable information on the dolphins' status, but the programme alone is not a conservation measure.

In Hong Kong, we have a good environmental impact assessment process, showing how impact from development projects should be avoided, minimised or mitigated to ensure developments do not have a major ecological impact. Judging from the continual decline of the Chinese white dolphin, however, the logical conclusion is that the mitigation measures of development projects in its habitat, in western waters, are not working.

One key component of the existing dolphin conservation plan is the Sha Chau and Lung Kwu Chau Marine Park, the so-called "dolphin sanctuary". Given that the area is small and the dolphins inhabiting it venture out to surrounding waters that are not protected from development or habitat modification, its effectiveness as a sanctuary is somewhat hindered. This marine park should at least provide increased feeding opportunities for the dolphin population, by allowing fish and other food stocks to flourish. However, this objective is undermined by the fact that commercial fishing is still allowed with a permit within the marine park. The result is that the dolphins in this "sanctuary" are competing with fishermen for food.

The state of the Chinese white dolphin illustrates how far conservation measures lag behind development plans. The once-proposed Southwest Lantau and Soko Islands marine parks have yet to become reality. Another ironic example is that the Brothers Islands will be designated a marine park only after the completion of construction of the Hong Kong-Zhuhai-Macau bridge in 2016, long after any damage has been done.

As an ecologist, it is alarming to see decision-makers, without the relevant background, making offhand comments that grossly understate development projects' impact or oversimplify conservation actions. We have well-trained, professional staff in the AFCD and Environmental Protection Department who should be duly consulted and listened to.

Outside the government, there are also experts in tertiary institutions and green groups who are happy to advise. But it appears that development is the golden rule and anything standing against it, even a scientific discipline such as ecology, has no place in the decision-making process.

If we are serious about saving the charismatic Chinese white dolphin, we should look at the threats seriously and address them. Since the threats result from human activities under the control of several different government departments, they should all agree on, formulate and implement a holistic and comprehensive dolphin management plan without further delay.

The Convention on Biological Diversity was extended to Hong Kong in 2011. The Aichi Biodiversity Targets, set out in the convention's strategic plan for 2011-2020, set a clear goal: address the underlying causes of biodiversity loss by bringing biodiversity into the mainstream across governments and societies. To fulfil its obligations, the Hong Kong government should start integrating biodiversity values into development and planning processes.

Conservation and development should never be a zero-sum game. With a finite area of land and sea, and with global crises concerning water and climate looming, Hong Kong needs a more open dialogue on how we want to shape our environment and life.

In some ways, ecology is the only "voice" nature has to make itself heard by decision-makers. By strengthening this voice, we will not only reach informed, consensual decisions and create viable solutions for Hong Kong society, we will hopefully create a future for the Chinese white dolphin.