Posted by amandaevans on Wednesday, 03 July 2013 in Wildlife Conservation 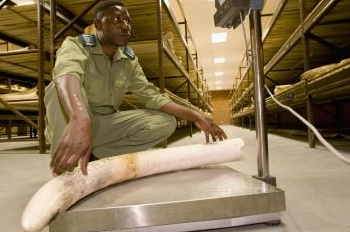 Anything that can be traded—legally or illegally—usually will be traded. That goes for the tusks, fins and other animals parts—and the endangered species that are attached to them. It hasn’t gotten the coverage that the issue deserves, but we’re currently in the middle of a poaching catastrophe. Roughly 30,000 African elephants were killed in 2012—more than three elephants an hour—the largest number in 20 years. South Africa is on pace to lose almost 1,000 rhinos this year—a world record, and a vast increase from the less than 20 rhinos a year that were poached on average between 2000 and 2008. The killing of species already under pressure by habitat loss and climate change is fueled chiefly by a vast increase in demand from the growing middle classes of Southeast and East Asia, where animals parts are used in traditional medicine and herbal drugs. Wildlife trafficking is now valued at between $7 billion and $10 billion a year, putting it in the top five illegal activities after drugs, human trafficking, counterfeiting and weapons.

If Asia is the center of demand for poaching, Africa is the center of the supply. That’s why the White House used the last days of President Obama’s Africa trip to announce to launch a new wildlife trafficking initiative. With an executive order, Obama will convene a Cabinet-level task force composed of representatives from the State, Interior and Justice Departments that will create a national strategy to combat poaching around the world. The order will include a $10 million effort to train woefully underpaid police officers and park rangers in African countries like Tanzania, where Obama finished his trip on July 2. “The entire world has a stake in making sure that we preserve Africa’s beauty for future generations,” Obama said at a joint press conference with Tanzanian President Jakaya Kiwete on July 1. Obama is right—and how the rest of the world, including Asia, responds to the poaching crisis will decide just how effective his executive order is.

Speaking to reporters earlier this week on Air Force One, Grant Harris, the senior director for African Affairs at the National Security Staff, laid out the reasoning behind Obama’s anti-poaching efforts:

Wildlife trafficking has really exploded in terms of scale and also in terms of the types of poachers and organized crime networks that are involved in this activity.  And it’s decimating the populations of some of Africa’s iconic animals, including rhinoceros and elephants as well.  Some estimates put this trade at $7 to $10 billion a year.

Some of the reasons why we think that this is so important — first is because of the conservation angle and that some of these iconic animals are actually on the verge of extinction or heading in that direction.  To give you a sense in terms of the value, a rhinoceros horn is worth $30,000 per pound on this black market, which is literally worth greater than its weight in gold.  And ivory is trading at $1,000 per pound.

Poaching isn’t just an environmental issue. As wildlife trafficking becomes a big international business, rebel militias have begun moving into the trade, just as they long have with illegal drugs, using proceeds from the sales of animal parts to fuel civil conflict. The poaching rhino horn or elephant tusk becomes blood money twice over. “Trafficking is truly threatening the survival of elephants, rhinos and other species,” Interior Department Deputy Secretary David Hayes told reporters in a conference call yesterday. “The dark side of this is that billions in illicit revenues are fueling an illegal economy.”

Poaching isn’t new. The bloody ivory wars of the 1980s led to the deaths of as many as 1 million elephants in Africa, a slaughter that continued until 1989, when the global Convention on the International Trade of Endangered Species (CITES) voted to ban all trade in elephant ivory. Endangered species made a comeback, thanks to international sanctions and tougher on the ground enforcement in Africa. But economic growth lifted hundreds of millions of Asians into the middle class or higher, the demand for those parts multiplied—as did the price poachers could demand on the international market. Suddenly wildlife trafficking was a major criminal industry. “This is an epidemic that we have never seen before,” said Jeff Trandahl, the CEO and executive director of the National Fish and Wildlife Foundation. “There is aggressive and organized poaching on the ground now.”

I’m not sure how much of a difference $10 million in new U.S. funding will make, against a global illegal wildlife market worth as much as 1,000 times more than that. (You can see the details of the plan here.) More money for Africa’s woefully underpaid game wardens and rangers—now up against poachers armed with nigh-vision goggles and high-powered rifles—would certainly help. And that includes at home—thanks to sequestration, the Fish and Wildlife Office of Law Enforcement cancelled plans this year to train 24 new agents to investigate illegal trade. But the lasting solutions—much as they do with the drug trade—begin and end with curbing demand. (And not just from Asia—the U.S. is a major market for illegal wildlife.) “You can’t ignore the fact that increased wealth in parts of the world leads to increased purchasing of animals and animal parts,” said Carter Roberts, the president and CEO of the World Wildlife Fund in the U.S. “This is an intrinsically global issue.”

President Obama brought up wildlife trafficking with President Xi Jinping of China at their recent summit. And there have been some bright spots, including a relatively successful campaign to convince mainland Chinese to stop order shark fin soup, which leads to the deaths of tens of millions of sharks each year. But a lot more will have to be done, and quickly—conservationists estimate that we could effectively lose the African elephant by the end of the decade if recent poaching trends hold. That’s not a legacy any President would wish for.