Posted by amandaevans on Sunday, 07 July 2013 in Population 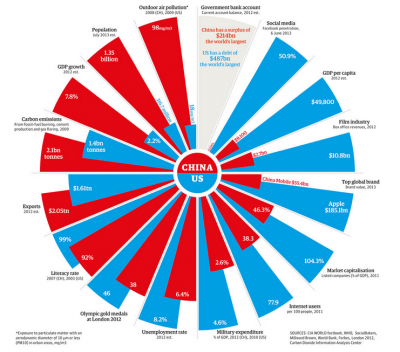 America and China's economic interdependence has prevented the two super-powers from going to war, but there have been frequent murmurs of disapproval on both sides regarding hacking, intellectual property, and aggressive international resource grabs. The recent U.S.-China summitsupposedly addressed some key economic concerns, while appeasing territorial water conflicts and disputes with Japan over sovereign islands. But meaningful dialogue over the future of environmental protection was notably absent.

As the two most powerful nations in the world, America and China also carry the distinction of biggest environmental offenders. But whereas America is struggling to wean off of its fossil fuel addiction, China has an array of far more complex problems preventing it from ranking environmental stewardship within its top 10 concerns.

Of China's ever-growing population, approximately 600 million citizens comprise their emerging "middle class" – which continue to flock to the coastline in search of jobs and opportunities. This massive influx is double the size of the entire American population, and still leaves almost one billion Chinese in the farming and rural mainland.

Other than placing thousands of workers in unregulated factories with dire work conditions, such as recently-exposed Apple manufacturer Foxconn, China's pollution rates have been reaching record highs. In Beijing, air pollution levels rose to 20 times the recommended limit by the World Health Organization. Factories have been caught dumping vast quantities of dye in rivers, exposing a visually alarming reminder of the lack of regulation and political corruption, which allows for brazen acts of contamination.

A 2-kilometer long section of the Quxi River was also polluted by latex, filling the water with toxic materials.

More recently, China pulled a thousand dead ducks from the Sichuan river, while over 16,000 dead pigs were pulled from the Huangpu river. Investigations suggest farmers were poisoning the pigs to encourage a fevered diet that rapidly increased their size — leading to higher profit on their sale. But when the pigs died of internal bleeding or couldn't be sold, they were simply dumped in the river to save on burial costs.

Beyond contamination and pollution, poor environmental stewardship has led to the disappearance of over 28,000 rivers! Those few rivers that do remain are so polluted that activist entrepreneurs have offered huge rewards to senior political officials willing to swim in the river for 20 minutes — an attempt to draw attention to environmental problems rarely discussed. Rather than address the difficulties and damages caused by a large population, the only social villains publicly discussed by Chinese media or the political elite are the "troublesome" Tibetans led by the "menacing" Dalai Lama, the dangerous Ulghur Muslims, or the "evil" Japanese. This is political theater akin to getting Americans riled up over the Westboro Baptist church funeral protests.

China has made some terrible mistakes in its need to develop its economy, and rather than avoiding the same short-sighted errors committed by the West during their industrial revolution, it seems to have only repeated them on a grander scale. With the advantages of foresight and hindsight, China could have chosen to invest in better technologies, clean energies, smarter water management, nuclear power, and sustainable economic growth, guaranteeing a flourishing future.

Instead of planning for the long term, however, China has built entire cities that now stand emptywhile hardly any citizen can actually afford to purchase a home. The country has one eighth of the world's drinking water, and it is polluting it at devastating rates. Over a million Chinese citizens are dying of air pollution per year! Meaningful progress on any of these fronts is being postponed by a corrupt political elite, leaving future generations to deal with issues that will have a higher cost and cause more environmental damage. Radical ideas are even being thrown around to address the varying problems, including PH "conditioners" which would float above cities to clean air pollution — only signifying how desperate the state of affairs has become.

Most alarming of all, Chinese environmental abuses go well beyond their own borders. From the Bahamas to Mozambique and the Philippines, Chinese fishing vessels and factory processing ships have been plundering the ocean for fish at a rate that will rapidly cause mass extinction of aquatic life. Local fish markets have described massive Chinese ships draining the oceans and shipping all they catch to an ever-hungry Chinese population. South American and African nations have more than felt the Chinese presence encroaching on their resources, which has led to some countriesputting restrictions on Chinese acquisitions.

China continues to hurl an array of short-term solutions at long-term problems. It is mismanaging the growing population with cheap manufacturing rather than advanced technologies and devastating their natural resources with abundant pollution. While smaller nations like Bhutan can pursue admirable ambitions like the world's only wholly organic farming culture, China will need to gamble on smarter, tougher, and more sustainable advancements to solve its ever-expanding set of calamities.