Posted by rackfokus on Tuesday, 16 July 2013 in Sustainable Development 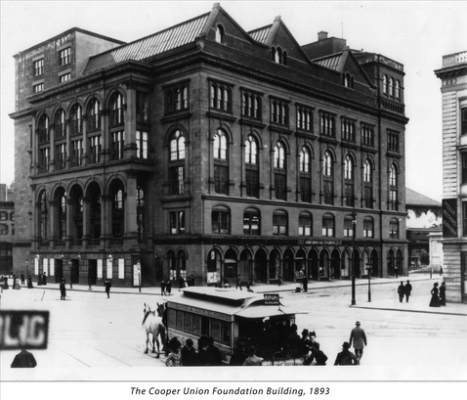 Far too many conferences are boring, repetitive and uninspiring. Frequently, we find ourselves preaching to the choir, perhaps just trying to impress each other. Then, every once in a while, an event manages to bring together the right “vibes” and that’s when ideas can coalesce and energize.

I found myself in one of those happy circumstances a little ways back at an event titled “Understanding Urban Sustainability: One Block at a Time,” hosted by the Cooper Union Institute for Sustainable Design (CUISD) and the Fourth Arts Block (FABnyc).

The Fourth Street Arts Block looks like a fairly typical NYC East Village street, but is home to several Off-Broadway stage theaters (among other productions, “Rent” began there) along with 100-year old tenement buildings, many with residents whose families have lived there for generations. It’s also adjacent to the Bowery, which is undergoing a renaissance, with high-rise look-at-me hotels and museums replacing the flophouses and used restaurant supply stores.

The block is the only official “cultural district” in NYC, but what interested me is that FABnyc has also embarked on a mission to green the block. To that end, they have a project with neighboring Cooper Union “to generate new and innovative solutions to the complexities of urban sustainability.” In addition, their “Model Block” program has undertaken energy efficiency steps such as enabling buildings on the block to install white roofs and obtain energy audits.

At the event, the questions revolved around what else FABnyc could be doing and how it might be looked at as a model for other blocks. As the discussions evolved, several topics I’d been pondering began to come together. In columns I wrote last year (here, here and here) on a massive Lower East Side redevelopment project called SPURA, I spent a fair amount of time discussing neighborhood and street vitality, focusing on how monolithic buildings and big box stores sap energy compared to the way older “Main Street” type designs work.

This is not news, of course. The realization has been around since Jane Jacobs wrote about it and, in more recent years, Andres Duany and Elizabeth Plater-Zyberk have concentrated on it as has Kaid Benfield (though his some of his posts have lamented that Main Street’s future may not be all it’s cracked up to be).

Fourth Street’s architecture is pretty intact in that the buildings are walk-ups and most have storefronts on their ground level. So there is a constant level of activity and interaction involving residents, shop owners, dog walkers, theater attendees and others. The stores range from a small scale food co-op that’s been there for decades to a newer artisanal chocolate shop (highly recommended!). When the street is closed for a festival, it’s not the typical characterless affair that abounds in NYC summers with sock vendors and greasy food, but instead has performances, local artists selling jewelry, and classes to teach kids to ride bicycles.

What’s the connection to sustainability? One of the biggest issues in sustainability is disengagement. Many, if not most, people feel that any efforts they might be able to undertake are too difficult or, more commonly, too insignificant to matter. Living (or working) on a block or in a neighborhood where anonymity is the rule discourages any sense of ownership, of belonging to something larger than just you. Simultaneously, this means you have less incentive to participate and less sense of responsibility to a community. This can contribute to any number of “quality of life” problems like noise and littering. If you don’t know your neighbors, you’re less likely to care.

The digital world has exacerbated this problem. Several conference attendees commented on how their blocks and communities became closer during the post-Sandy blackout because people were forced to leave their computers, X-boxes and televisions. People who lived across the street from each other or even next door met for the first time. This phenomenon resulted in some mostly tongue-in-cheek suggestions that we have regular planned blackouts. (It’s worth noting, though, that the Internet and email can also support block associations and community bulletin boards and the like.)

It’s fairly apparent that a key to sustainability is popular support and participation – buy-in, some call it. Active street life can foster this in ways that high-rise apartment buildings, even when built to the street line, and towers-in-the-park cannot. For instance, one of my suggestions for future projects was a block collection system for compost. NYC currently does not have compost collection (though it’s in the works). In the meanwhile, residents have to store their compost at home (keep in mind that most of us do not have outdoor space) and then take it themselves to a collection center on appointed days. That’s too much work and too much icky-ness for most. But if communities were to set up local, perhaps self-run systems, my bet is many more would participate – even without the “stick” of government requirements – and we might even see friendly competition to see whose building composts and recycles the most. Might this be more successful than a city-run non-participatory system? And might the resulting community involvement and ownership result in greater awareness of the environment, near and far, as not something that is someone else’s responsibility or a problem that is unsolvable by individuals?

At the end of the event, I brought up that this was an almost perfect application of the old environmental slogan “Think Global, Act Local.” Strengthening communities can get people out of their individual shells and lead to more involvement in and buy-in of local eco practices, which in turn can get people thinking on the larger global level since the world is, after all, just a much larger community. 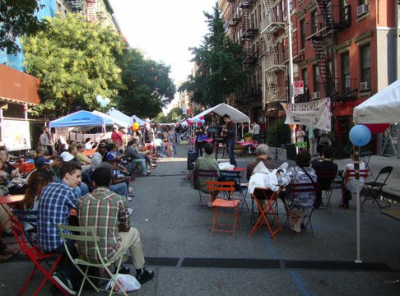