Posted by Tiny on Tuesday, 23 July 2013 in Wildlife Conservation 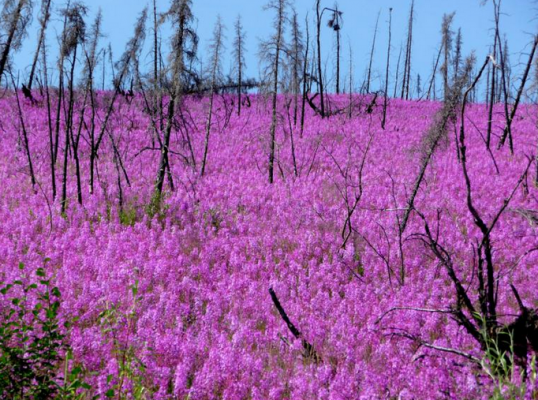 Wildfires near the Arctic Circle are becoming increasingly more common. And in one Alaskan region called the Yukon Flats, fires are cropping up at a more frequent pace than any other time in the past 10,000 years.

A team of scientists led by University of Illinois researcher Ryan Kelly document their findings on the Yukon Flats in a paper published Monday in the Proceedings of the National Academy of Sciences. Their data suggest that the forests on the flats, once dominated by black spruce and white spruce, are shifting in character, becoming made up of an increasing number of deciduous trees, which shed their leaves in autumn. The coniferous black spruce and white spruce are more susceptible to fire than deciduous trees.

"We reconstructed the fire history by picking charcoal fragments out of sediments preserved over thousands of years," Kelly said in a statement. "And from what we can tell, the fire frequency at present is higher than it has been at any time in the past 10,000 years."

The ongoing trend on the flats where coniferous trees are replaced by deciduous trees echoes a similar shift that occurred sometime between 1,000 and 500 years ago, coinciding with what’s called the Medieval ClimateAnomaly. At the time, the North Atlantic region experienced an upward tick in average temperature, mimicking the present warming conditions in the Arctic.

"This period probably wasn't really as warm as today, definitely not as warm as it's bound to get in the future, but may be the most similar to today," Kelly said. "There was lots of burning, almost as much as today, and the fires were particularly severe."

As the composition of the forest tilted toward more deciduous trees, the fire resistance of those plants combated the rise of wildfires. However, wildfire activity on the Yukon Flats is already well above what was seen during the Medieval Climate Anomaly. Over the past 3,000 years, the region typically saw about nine or 10 significant fires every thousand years, or about one fire every hundred years. But in the last 50 years, the rate has doubled, to the equivalent of 20 fires per 1,000 years, or a fire every 50 years.

The potential environmental impact of a burning Yukon Flats could be worrisome. Boreal forests, like the Yukon Flats, contain a lot of carbon locked in their soil. When they burn, that carbon alights into the air and mixes with other greenhouse gases, helping to warm the Earth further.

A change in the forest could turn the tide. The authors’ study area is already covered by deciduous forest that has sprung up after the spruce trees burned down. But coauthor Feng Sheng Hu said even a deciduous forest will be vulnerable if warming continues apace. "It's wood," he said. "If it's dry, it will burn."