Posted by Wolf on Tuesday, 13 August 2013 in Climate Change 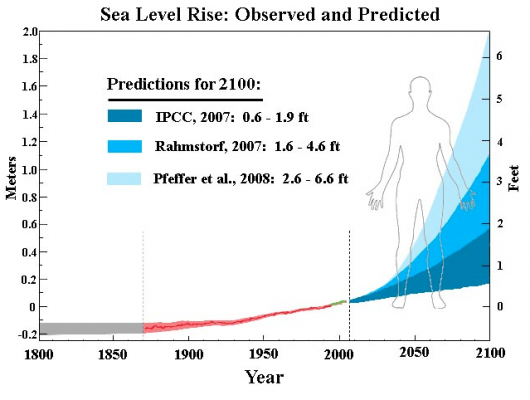 A rise in sea levels threatens the viability of more than 1,400 cities and towns, including Miami, Virginia Beach and Jacksonville, unless there are deep cuts in heat-trapping greenhouse gas emissions, says an analysis out Monday.

Prior emissions have already locked in 4 feet of future sea-level rise that will submerge parts of 316 municipalities, but the timing is unclear and could take hundreds of years, according to the paper in the Proceedings of the National Academy of Sciences. If global warming continues at its current rate through the year 2100, at least an additional 1,100 cities and towns will be mostly under water at high tide in the distant future.

"It's like this invisible threat," says author Benjamin Strauss,a scientist at Climate Central, a non-profit, non-advocacy research group based in Princeton, N.J., that's funded by foundations, individuals and federal grants. He says these sea levels are much higher than what's predicted this century — typically 1 to 4 feet — because climate change multiplies their impact over hundreds of years.

He says many people have the mistaken notion that if greenhouse gas emissions stop, the problem of sea levels rising will go away. It won't, he says, because carbon dioxide stays in the atmosphere for centuries — even millenniums — and contributes to two factors that raise sea levels: higher temperatures and the loss of Greenland and Antarctic ice sheets.

His dire projections suggest that the billions of dollars in damages from last year's Superstorm Sandy are a harbinger of the future. "The current trend in carbon emissions likely implies the eventual crippling or loss of most coastal cities in the world," writes Strauss, who directs Climate Central's program on rising sea levels.

To calculate U.S. cities at risk, he looked at elevation data and 2010 Census population figures. He blended that with a finding, published last month in a PNASpaper led by Anders Levermannof the Potsdam Institute for Climate Impact Research, that each degree Fahrenheit of global warming translates to 4.2 feet of sea-level rise in the long run (as much as two millenniums.)

"This is probably the most unique and novel way I've seen of talking about a longer time frame," says Peter Ruggiero, a coastal engineering scientist at Oregon State University. He says it's "useful," because most analyses look only at this century, and "the world doesn't end in 2100."

Yet he says there are huge "uncertainties" projecting so far into the future, and the paper has "a bit of fuzziness" because its estimates on the number of people who could be affected assume no change in coastal population or land features. The estimates also do not account for potential engineering solutions.

Some climate scientists say the findings may be counterproductive. Looking at such a distant tomorrow "could scare people about something that might not happen for centuries," says Jayantha Obeysekera of the South Florida Water Management District, a regional government agency. He says such long-term projections may not be helpful to U.S. planners who tend to focus on the next few decades.

Strauss' analysis says 3.6 million Americans live in the 316 municipalities — including New Orleans, Atlantic City and Fort Lauderdale and Miami Beach — that are already considered at risk, because half of their populations live below the future high tide level that prior emissions have locked in.

Florida is the most vulnerable state by far, Strauss says, adding that Louisiana, New Jersey and North Carolina also face enormous difficulties. Unless major change occurs, he says, more than 100 cities in each of these states could be threatened.

Strauss says tragedy can be avoided or mitigated with deep global pollution cuts followed by technology that sucks CO2 from the atmosphere. Such bold steps, he says, could help preserve hundreds of coastal communities.

If current emissions continue, his analysis projects the year when global carbon emissions will lock hundreds of U.S. cities into the eventual sinking — below the high-tide line — of the land that now houses half their residents: Galveston, Texas (2030); Miami (2040); Norfolk, Va., (2044); Coral Gables, Fla. (2044); and Virginia Beach (2054).