Posted by bchristo on Friday, 16 August 2013 in Animals 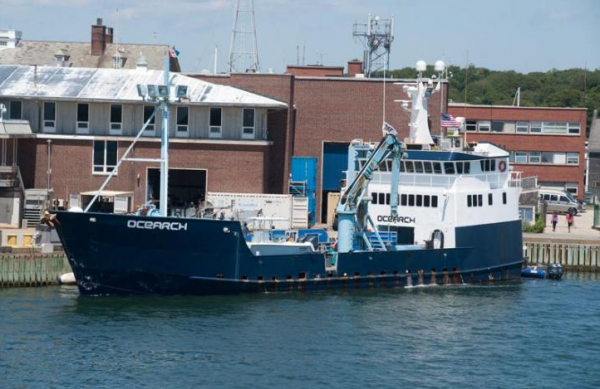 WOODS HOLE --- The sendoff felt a little like the dawn of a new adventure, a trip to uncharted territory — a discoverers’ voyage to the new world, or the wild west. And the subject of the voyage is almost as unknown and misunderstood, its public perception more determined by stereotypes than hard facts. The biology and behavior of great white shark, the top predator of Atlantic ecosystem, remains poorly understood.

To that end, a 126-foot research boat set out from Woods Hole at 2:30 p.m. on Tuesday afternoon under a bright blue sky, embarking on a rare opportunity get close and personal with the apex predators. The 31-day voyage will fish mostly in mid-cape Chatham waters, where an estimated 15,000 gray seals attract the whites to feed. The crew will capitalize on the natural chum slick concentrated in this area, to find great whites, temporarily hold them for research purposes, tag them, and send them on their way. Led by OCEARCH, a marine research nonprofit which receives funding from major corporations, the project “will be the most in-depth study of Atlantic white sharks to date,” said Dr. Susan Avery, president of Woods Hole Oceanographic Institution, in remarks to the press Tuesday afternoon before the boat left the harbor. The expedition is part of the global shark tracking mission of OCEARCH, which has already completed 17 separate expeditions, most recently on a 48-day voyage to Trinidad and South Africa. The 126-foot vessel is designed to accommodate the largest of the ocean’s APEX predators, and has the technology to keep the sharks alive on board the vessel for 15 minutes, while scientists extract information for their research, all the while hosing down the animal to keep its gills breathing. The vessel’s progress can be followed on their website, where they upload shark tracking information in real time. Shark migration patterns are still much of a mystery, as are their behaviors in relation to mating, feeding and gestation. This voyage is equipped to catch, study and tag as many as 20 white sharks, a significant increase from the two sharks tagged in Cape Cod waters last year. Biologist Gregory Skomal, who works for the state Division of Marine Fisheries and serves as the lead scientist on this expedition, said he’s confident there are at least six great whites in Chatham waters right now, and probably more.

In the 15 minutes the shark visits the vessel, scientists will extract muscle to be biopsied to measure pollutants including mercury, perform ultrasounds on sharks to see if they are pregnant, and measure the reproductive organs of males. They will also take fin clips, and study tissues to determine the content of their food. Tagging may enable the scientists to track their mating, feeding and birthing patterns over a period of three, four or even five years. Atlantic white sharks are not a species currently protected by fishing regulations, but Dr. Simon Thorrold, a fish ecologist with WHOI, said they probably should be. “White sharks are not listed as endangered in the Northwest Atlantic, but that is almost certainly because we don’t know enough about their population size,” Mr. Thorrold said. The species’ top spot on the food web means that their demise would wreak havoc on the entire ocean ecosystem. The expedition is focused on the white shark partly because of its charisma, said Simon Thorrold. Considering their fame, he said it’s surprising how little we know about them. The expedition aims to improve the public profile of the three ton predator, by increasing the knowledge associated with them. “Once that data comes in, tone of the conversation turns from the theme music of Jaws to one of curiosity,” said Chris Fischer, founder of OCEARCH.

Up until OCEARCH’s involvement with the Cape last year, much of the local research on sharks in the Atlantic has relied on basic tagging tools and the harvesting of tissue samples from deceased sharks caught in tournaments and commercial fishing expeditions. But Dr. Thorrold said this is a 20th century way to study sharks. “Once you kill the shark, there is really only so much you can learn about them,” he said. “You can learn about what was in its stomach at that time, you can learn whether it was pregnant or not at that moment in time. [But with this new technology], we are putting a tag on it and we are learning about it two years later.” OCEARCH will likely not return to Cape Cod waters for four or five years, Mr. Fischer estimated. “We are going to maximize the 15 minutes we have with that shark,” Mr. Skomal said. “Me, I’m just super excited to get out on the water and start learning.”