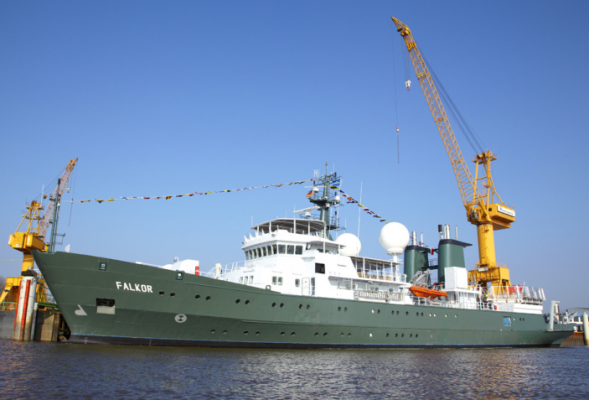 Google's chairman has funded a $60 million research vessel to study a "dead zone" in the Pacific Ocean, along with other mysteries of the sea.

The 272-foot vessel, Falkor, took off from San Francisco Thursday, headed to Vancouver Island off the Canadian coast, near Victoria.

A dead zone is where sea life dies off from a periodic lack of oxygen, called hypoxia. Researchers speculate that the cause may be a changing climate or caustic runoff like sewage from land.

Nathan Cunningham is one of the marine technicians on board.  He says the ship carries something that no one can get into.

"What we have instead  is a  very high definition camera that come up from the sea bed in real time, lots of methods of sampling water and also we have a robotic manipulating arms so we can deploy equipment and get samples once we are down there."

The Falkor is funded by the Schmidt Ocean Institute, a group co-founded by Google executive Eric Schmidt and his wife Wendy. Maybe you recognize the name — the Falkor was named after the flying Luck Dragon from "The Neverending Story" novel and films.

The Falkor carries an unmanned submarine that will travel deep into the ocean off Vancouver Island.

And scientists working aboard the Falkor are treated to amenities not found on the usual research ship: a sauna and down-filled bunks among them, the San Francisco Chronicle reported.

"It may not be needed up here," Victor Zykov, the institute's director of research, told the newspaper about the sauna. "But when we're up in cold Canadian waters, the scientists and crew will surely appreciate it after a long day on deck."

After stopping to study the dead zone, the ship will move on to study a submarine volcano, the Axial Seamount, about 300 miles west of Oregon.

A microbiologist will study the tiny organisms living for millions of years inside fissures in the volcanic rock, and another scientist will study viruses that have adapted to the unique habitat.