Posted by plantitfilm on Friday, 23 August 2013 in Air Quality 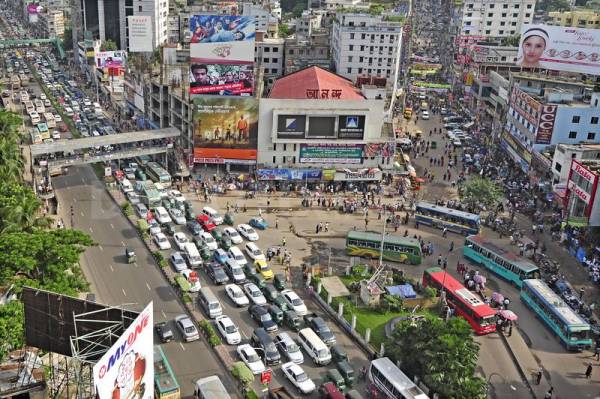 Dhaka, the capital of Bangladesh like many other mega cities of the world sees a good number of development works every year but environmental havoc created due to such development projects gives a broad grin to the much talked theme on 'green living'.

If anyone visits the on-going large construction of flyovers and other development projects in any part of the city or the country, he or she could see the onslaught of environmental havoc due to the air pollution caused by dust and mud.

The chock-a-block Jatrabari-Gulistan flyover construction area is the best example where thousands of people face the worst experience while commuting through this area every day since the biggest project undertaken under the Public-Private Partnership began three years back.

"If the authority keeps the construction materials clean, wrap them with simple papers or sack-cloth or polythene papers, the environment remains less polluted, but who cares," said Md Zahirul Quayuum, a local inhabitant.

Some 1.0 million people live in the surrounding areas of the flyover project and the environmental havoc rubbed salt into their wound.

The CER of the stakeholders of the flyover project gives a broad grin to the theme when Communication Minister Obaidul Quader himself termed the project 'an embarrassment.'

"Though it's not a project under the communication ministry, it's an embarrassment for all of us, mainly because of the concerned officials refusing to get out of their hibernation," the minister said after a meeting held at the ministry's conference room recently.

A significant part of the nine-kilometre flyover remains unfinished. The project has given rise to heavy traffic congestion, muddy and broken walkways and random bus stoppages in the surrounding areas.

Similarly, a good initiative taken by a telecom company at Hatirjheel project in the capital is yet to reap the full benefit because of mindless construction works inside the newly-opened public space. Around 4,500 saplings of various categories are being planted at selected spots in Hatirjheel area but everyday a good number of trucks carry tonnnes of soil and thus hamper the afforestation drive inside the newly-built space considered as one of the finest and rarest civic facilities Dhaka dwellers have ever had.

"Trucks carrying the soil and mud should be banned to ply inside the area and if necessary, wheels of the mud-carrying trucks should also be cleaned ahead of entering the paved roads," Nazrul Islam, an environment-conscious student of nearby East West University said.

The student who lives nearby the project area said everyday he counts at least five trucks carry the sticky earth inside the area and thus disgrace the 'enduring beauty space' opened only few weeks ago.

When contacted, a project official told this correspondent that since it was the rainy season, the mud would be washed away naturally! He, however kept mum whether the wheels of the trucks could be cleaned after picking up the soil loads.

Environment and Forests Minister Dr Hasan Mahmud, however recently said the government has initiated a 'massive campaign' along with policy initiative and formulation of a new law to reduce air pollution.

The Minister said owners of the brick kilns have been asked to adopt new technology by the end of this year aiming to reduce air pollution.

Brick kilns are responsible for 30 percent air pollution in the country, he said adding 60 percent energy of brick kilns will be saved, if brick burning is done using modern technology instead of traditional methods.

According to a recent study, Brick kilns are the most dominant source of air pollution in the country while vehicular emissions have been identified as the second largest contributor to air pollution.

There are about 5000 brick kilns in Bangladesh, which are largely responsible for air pollution, and increasing number of vehicles is creating concomitant pressure on air quality, it added.

According to the World Bank, up to 10 percent of respiratory infections and diseases in Bangladesh may be attributable to urban air pollution.

In another example of giving a broad grin to CER, the BGMEA (Bangladesh Garment Manufacturers and Exporters Association) Building in Dhaka threatened a network of lakes that form the natural drainage system of Dhaka city.

The tower surrounded by water, accessible by a small bridge reflects the poor commitment of many of the garment owners' towards CER.

It is a symbol of the power of Bangladesh's garment industry, the headquarters of the country's most powerful association of garment company owners. It is illegal, according to Bangladesh High Court which said that the land had been illegally obtained, the building had been erected without proper approvals. The High Court called the building "a scam of abysmal proportions" and ordered it demolished within 90 days.