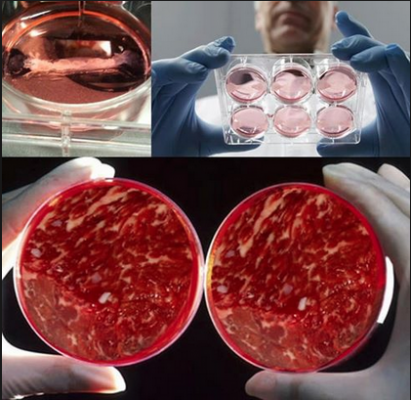 Yesterday at a press event in London, two food writers took a bite into the world's most unusual hamburger. Grown meticulously from cow stem cells, the hamburger patty represents the dream (or pipedream) of many animal rights activists and environmentalists. The burger was developed by Physiologist Mark Post of Maastricht University and funded by Google co-founder Sergey Brin in an effort to create real meat without the corresponding environmental toll.

In order to create the burger, Post and his team extracted stem cells from two cows and employed thee to grow 20,000 muscle fibers, which were then removed by hand and pressed together. The researcher team added beetroot juice, saffron and breadcrumbs, with the end result being a biologically-real piece of beef in three months time but costing around $330,000.

But why create such a hamburger at all?

For animal welfare activists, it means producing meat that is truly cruelty-free. No animal died, or lived in suffocating conditions, for that single hamburger eaten yesterday. In fact, Sergey Brin noted that he funded the development of the stem cell burger due to his concerns over livestock conditions o in modern farming. This issue has also pushed many animal rights groups, such as PETA, to help fund similar efforts.

The other issue is global sustainability. Although meat is craved by many, it comes with massive environmental impacts. As a food source meat is hugely inefficient, requiring more land, water, and energy resources than many other staple foods such as grains. Around a quarter of the world's usable land is made up of pasture, while growing food for livestock takes up around 30 percent of arable land. For example, most of the destruction of the Amazon rainforest is linked either to cattle ranches or soy fields, the latter which is often used to feed livestock.

The meat industry also has a massive greenhouse gas footprint: 5 percent of the world's carbon and nearly 40 percent of its methane is linked to livestock.

But in a world of seven billion people (and rising), demand for meat is not slowing down. In fact in many parts of the world where the middle class is growing—such as China, India, and Brazil—demand for meat is skyrocketing with large-scale environmental impacts.

According to Mark Post, the stem cell hamburger grown in his lab decreased land-use by 90 percent and energy costs by 70 percent.