Posted by jonehopp on Monday, 12 August 2013 in Sustainable Development 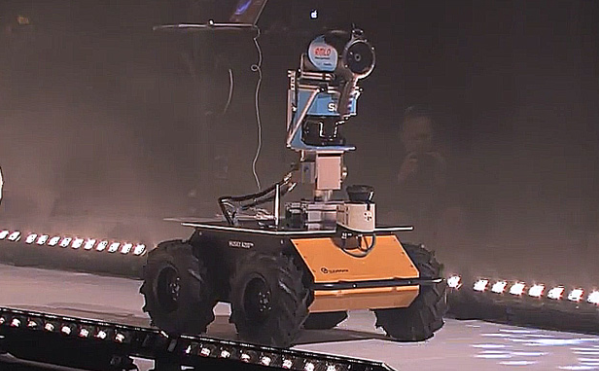 It may seem uncomfortably close to science fiction, but robots are moving ever nearer to having humanlike abilities to smell, feel and see their surroundings, allowing them to operate more independently and perform some of the dangerous, dirty and dull jobs people don’t want to do.

They can “smell” gas leaks, conduct underwater surveillance and even sort boxes by shape and color and toss them into the appropriate warehouse bin. Advances in sensor technology and software allow these machines to make split-second decisions without human masters overseeing them about how to follow a scent trail or where to go next.

“They are gaining human capabilities, whether it’s smell or touch or recognizing our voices,” said Daniel H. Wilson, a Ph.D in robotics and the author of “Robopocalypse,” a techno-thriller about what happens when robots go wrong.

“If they are going to solve human problems, they will have to have human abilities. Those are things that robots will have to understand if they play a role in our lives.”

Until now, robots have had to navigate with small infrared sensors that keep them from bumping into things. Some have relied on video cameras that send images to human operators. But a new generation of robots is gaining the ability to understand voices, see objects with the same depth perception as humans and use grasping arms that have dexterity close to that of humans.

Of course, none of them is yet as lifelike as “Sonny,” the android of Isaac Asimov’s novel “I, Robot,” who feels, can think for himself, move on his own and, in a limited way, emotes. Most robots with advanced sensing abilities are still in the experimental stage. More than toys but not yet tools, they work well in the laboratory but can’t yet handle real-world situations.

Take, for example, the robots that are sorting boxes, picking them up and tossing them into the right bin. They work pretty well – as long as the boxes are pretty much rectangular and aren’t moving, says Stanford University computer science professor Gary Bradski, co-founder of Industrial Perception, the start-up that invented the robot.

Getting robots to smell is one of the bigger challenges. A recent project out of the University of Tokyo takes a step in that direction. Scientists there recently unveiled a tiny robot that is driven by a male silkworm moth responding to a female moth’s seductive pheromone aroma.

The researchers said the “odor-tracking behaviors of animals” could eventually be “applied to other autonomous robots so they can track down smells, and subsequent sources, of environmental spills and leaks when fitted with highly sensitive sensors.”

Noriyasu Ando, an associate professor at the University of Tokyo Research Center for Advanced Science and Technology, who worked on the moth robot, said in an e-mail that the challenge was to develop a robot that could “behave alone, free from external wired connections, because the silk moth turns quickly and rotates very often.”

Ando said the ultimate goal is to develop a robot with its own smelling capabilities, one that can follow a trail just like the moth.

The team is now trying to build an artificial brain they’ve named Kei; the motor-moth using its sense of smell is one step toward that goal, he said.

Achim Lilienthal, who directs the mobile robotics and olfaction lab at Orebro University in Sweden, said smell is more complicated for robots than vision. Cameras can see an object as long as there is enough light, while odors exist as plumes and patches in the air and are not consistent in strength, which makes finding the source difficult.

Lilienthal gives the example of methane emanating from an old landfill. The town managing the landfill had set up devices to capture the gas produced by the landfill’s decay and burn it to heat the local hospital. But over time, as the plastic lining beneath the landfill developed cracks, more than half of the methane was evading the capture technology.

The town hired someone to walk around the landfill and sniff for leaks, but that didn’t work very well because the human nose is not very efficient.

Enter Lilienthal’s “gasbot,” which looks like a lawnmower with a big metal eyeball perched on top of a metal pole. This mini all-terrain vehicle picks up smells using two lasers: One absorbs the chemical signature of the methane and determines its concentration in the air. The second helps provide a three-dimensional map of the gas plume.

The advantage of the gasbot is that the lasers detect the gas remotely, without machine or human having direct contact with the plume.

“For most gas sensors such as smoke detectors, you need to physically encounter the smell,” whereas the gasbot uses its lasers to detect gas at a distance, Lilienthal said.

Scientists are working as well to create effective underwater robots. This task is very challenging because there is often not enough light for cameras to work well, while swirling currents and eddies play havoc with smells and chemical plumes.

To deal with this, a European group has built a robot that uses something called lateral line sensing. The lateral line is a series of nerve cells in fish that runs from just below the head to the tail and allows them to sense the speed and direction of currents, helping them catch food and swim in schools without bumping into each other.

More than 30,000 fish species use lateral line sensing, according to Maarja Kruusmaa, professor of biorobotics at the Tallinn University of Technology in Estonia. She and colleagues set out to create an electronic equivalent that would allow underwater robots to navigate more efficiently through currents.

After four years of work, they came up with FILOSE (Robotic FIsh LOcomotion and SEnsing), a robot that’s shaped like a rainbow trout. The researchers developed tiny sensors to monitor pressure differences in the water flowing around the robot. This allows the robot to follow in the wake of an object to cut energy use, according to Kruusmaa.

The robot is driven by a small electric motor and can be outfitted with a video camera for surveillance or with chemical sensors to detect pollution.

Meanwhile, Kanna Rajan, principal researcher for autonomy at the Monterey Bay Aquarium Research Institute, is designing underwater robots that are programmed to make their own decisions. They use sensors to determine where to hunt for oil spills, for example, or to swim toward a place in the ocean that scientists want to study, such as a feeding ground for fish or a range of underwater volcanoes that might erupt.

Rajan, a former NASA researcher who helped develop the rovers that landed on Mars almost 10 years ago, says it’s harder to build smart robots that work underwater than ones that function in outer space. That’s because communications for the latter travel through the relatively quiet vacuum of space. Underwater communications, however, are often blocked by layers of warm and cold water, slow-moving underwater storms and the sounds of passing ships and wildlife. The ocean’s salinity also tends to degrade robots much more than the cold temperatures of space, Rajan said.

“The ocean is a lot more harsh,” he said. “If you go in deep space, there’s not much going on, you are very careful as to what you do. Even on Mars you can talk to your robot.”

So what are the prospects for a seeing, smelling, sensing robot that works in the real world? That probably won’t materialize anytime soon, said Jelle Atema, a professor of biology at Boston University and the Woods Hole Oceanographic Institution.

“When it comes to a broad, robust exposure in the natural environment and still being able to perform the task,” Atema said, “animals have it all over human engineering.”