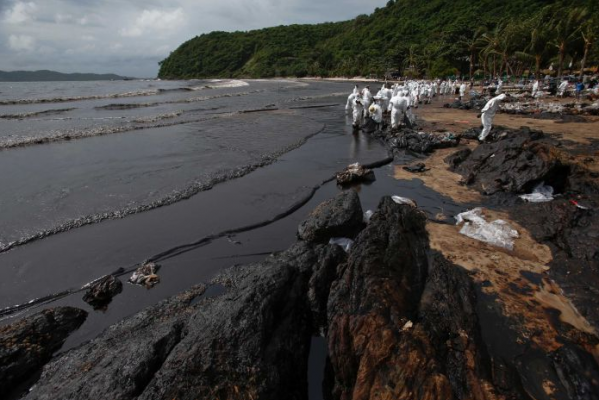 A huge diesel oil spill has caused a 300-square-kilometre slick in the Philippines' Manila Bay, endangering the local fishing industry.

A huge diesel oil spill has shut down parts of the Philippine capital's vital fishing industry, jeopardising the livelihoods of tens of thousands of people living along Manila Bay's coast.

Dead fish floated on the water and some residents fell ill from the fumes, as authorities said an estimated 500,000 litres of oil cast a slick across 20 kilometres of the coastline.

"Many of our young and elderly residents are getting sick," Marcos Solis, the captain of a fishing village near the worst of the oil spill, said on Friday.

"The price of fish and shellfish has also collapsed. Even those who fish far out to sea are affected because the fish smell the oil and swim away."

Authorities said the slick was caused by either a leak at an oil terminal on the bay or a ship that had unloaded diesel there.

"I cannot say that we have contained it because it has affected so wide an area," Garcia told reporters.

The area described by the coastguard covers about 15 per cent of the bay, the country's busiest body of water in a region where about 30 million people live, according to government data.

Locals said they feared for the immediate future of the bay's vibrant fish and shellfish industry, which feeds millions of people in the capital and surrounding areas.

"Fish and shellfish are floating up dead. It could be months before the shellfish industry is revived unless the water is cleaned up soon," Jose Ricafrente, mayor of Rosario fishing town, told AFP.

He said 40,000 people dependent on the fishing and shellfish industry in the bay were temporarily without jobs.

"Each boat here would typically haul in 30-40 kilograms of fish a day, so definitely the impact is huge," Perez told AFP by telephone as he toured the affected areas by boat.

Ricafrente said he had implemented an emergency "food-for-work" program, in which fishermen and their families would help in the clean-up in exchange for rice and canned goods with the local government.

The residents were collecting diesel from the water using bottles and other improvised scooping implements.

"Even the children are helping out. We have asked them to wear face masks," he said.

Ricafrente said at least two Rosario residents were taken to hospital and were put on oxygen tubes on Thursday, but both had recovered.

Garcia, the coastguard official, said authorities initially suspected the leak had come from the tanker that had unloaded fuel at the depot.

The 34,000-barrel-capacity M/T Makisig and its crew have been detained, he added.

In a statement issued on its account on the social networking site Facebook, Petron insisted its pipeline was intact.

"According to initial information, the leak may have come from the vessel but this will have to be investigated further," it said.

Garcia said the oil slick would likely remain for the next few days, or up to a week, depending on sea currents and the weather. He said the oil was expected to evaporate as it was exposed to sunlight.