Posted by Hugh Lavery on Friday, 30 August 2013 in Earth Violators 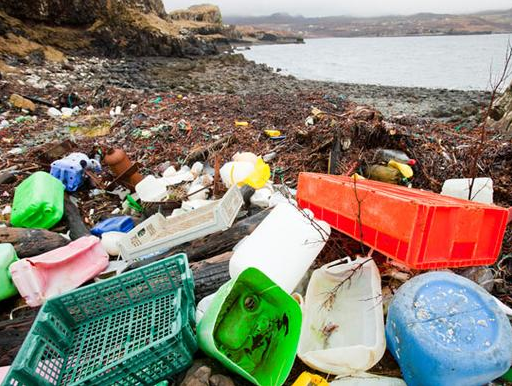 When did everything become Plastic?

When I was a kid, we collected shells on the beach, not plastic trash. There wasn't enough disposable plastic in those days for plastics to collect on the beaches. Plastic bags came into heavy use in American grocery stores when I was in high school in the late '70s, early '80s. By 2010, the Guinness Book of World Records named the plastic bag the decade's single most ubiquitous consumer item on the planet.

Slowly, over time, plastic packaging replaced cardboard, glass or metal to contain almost every item in the market. The petrochemical packaging was lightweight and inexpensive. It was cheaper to bottle soft drinks in plastic instead of glass. Soon drink companies realized they could sell even plain tap water as a new alternative to soft drinks, conveniently packaged in plastic, for drinking on the go. Since plastic was cheap, why not make disposable items out of it for big profits and market them as convenience items for busy people? Why wash dishes, cups and tableware you could simply throw away? Why buy a shaving device and replace the blade when you could buy one unit of plastic and metal and just throw the whole thing away when the blade gets dull? The developed countries all joined the disposable plastic craze and soon the developing countries were importing and manufacturing the stuff too.

All this single-use plastic has led to a serious build up of plastic waste all around the globe. Since plastic doesn't biodegrade, every bit of plastic ever made still exists either in a dump, as fill or fluff in another product, or in the environment. Much of the plastic is of a type not designed to be recyclable. Like bottle caps, this plastic is designed for immediate disposal -- feminine hygiene products, diapers, or fast food containers -- or is a hybrid product that can't be recycled for this reason (like the disposable razor or the Tetra Pack paper/plastic hybrid containers for liquids); or is not cost-effective to recycle like thin plastic bags or polystyrene.

Many communities in developed countries and most developing nations have no plastic recycling facilities at all. It's pretty clear that this is not a sustainable model. This is easily confirmed by a visit to a garbage dump or a beach where there is no taxpayer-supported cleanup on a regular basis. If we continue on the path of nonstop production of everlasting plastic waste, will we be buried in the stuff someday? For a glimpse of this future see Alan Weisman's The World Without Us chapter on plastics: Polymers are Forever.

California Kids Take a Stand in the Sand

Beach Clean-ups organized by schools, local governments and NGOs are becoming a regular part of childhood for kids who live in coastal communities. In the week preceding the UN designated World Oceans Day, more than 8000 California school children took part in beach cleanups to rid the sand of trash and then formed giant aerial images on five California beaches, each incorporating the text "Defend our Seas." The largest of these images was a fierce shark with a spear and shield that was imagined by 11-year-old Breann Mancilla and reproduced on the sand with the help of more than 5,000 children. The children's messages in the sand are shining a light on the huge quantities of plastic waste that are filling the oceans of the world. Watch a VIDEO of Kids Ocean Day on Dockweiler Beach with aerial footage from a helicopter that is being shared with world leaders at the Rio Earth Summit this week.

With plastic waste overwhelming our disposal systems and ecosystems, environmentalists at the Rio Earth Summit are making the case for going back to the old ways of reusable goods and biodegradable packaging. Natural Resources Defense Council and Plastic Pollution Coalition are presenting a commitment agreement for governments, businesses and NGOs to solve the plastic pollution crisis at the point of manufacture. The Global Call to Stop Plastic Pollution can be viewed at www.stopplasticpollution.org. Some of the plastic pollution focused events at the Rio Earth Summit are the following: Health Impacts of Plastics on Mothers and Children and Plasticity Forum.

The theme of The Rio Earth Summit is "The Future We Want." Here's to a future with clean beaches and oceans where children will once again be awed by shells and sea creatures, not the remnants of careless consumption.