Posted by CSea on Thursday, 12 September 2013 in Ocean/Seas/Coastlines 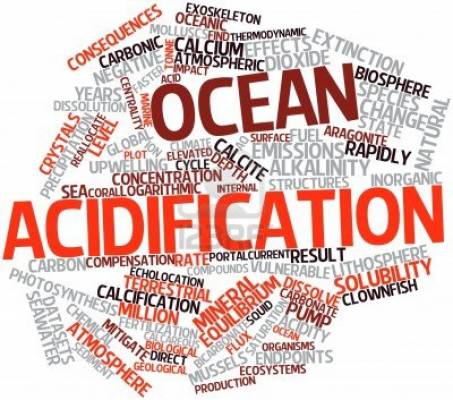 Acidification of the Arctic Ocean is occurring faster than projected according to new findings published in the journal PLOS ONE.  The increase in rate is being blamed on rapidly melting sea ice, a process that may have important consequences for health of the Arctic ecosystem.

Ocean acidification is the process by which pH levels of seawater decrease due to greater amounts of carbon dioxide being absorbed by the oceans from the atmosphere.  Currently oceans absorb about one-fourth of the greenhouse gas.  Lower pH levels make water more acidic and lab studies have shown that more acidic water decrease calcification rates in many calcifying organisms, reducing their ability to build shells or skeletons.  These changes, in species ranging from corals to shrimp, have the potential to impact species up and down the food web.

The team of federal and university researchers found that the decline of sea ice in the Arctic summer has important consequences for the surface layer of the Arctic Ocean.  As sea ice cover recedes to record lows, as it did late in the summer of 2012, the seawater beneath is exposed to carbon dioxide, which is the main driver of ocean acidification.

In addition, the freshwater melted from sea ice dilutes the seawater, lowering pH levels and reducing the concentrations of calcium and carbonate, which are the constituents, or building blocks, of the mineral aragonite. Aragonite and other carbonate minerals make up the hard part of many marine micro-organisms’ skeletons and shells. The lowering of calcium and carbonate concentrations may impact the growth of organisms that many species rely on for food.

The new research shows that acidification in surface waters of the Arctic Ocean is rapidly expanding into areas that were previously isolated from contact with the atmosphere due to the former widespread ice cover.

"A remarkable 20 percent of the Canadian Basin has become more corrosive to carbonate minerals in an unprecedented short period of time.  Nowhere on Earth have we documented such large scale, rapid ocean acidification" according to lead researcher and ocean acidification project chief, U.S. Geological Survey oceanographer Lisa Robbins.

Globally, Earth's ocean surface is becoming acidified due to absorption of man-made carbon dioxide. Ocean acidification models show that with increasing atmospheric carbon dioxide, the Arctic Ocean will have crucially low concentrations of dissolved carbonate minerals, such as aragonite, in the next decade.

"In the Arctic, where multi-year sea ice has been receding, we see that the dilution of seawater with melted sea ice adds fuel to the fire of ocean acidification" according to co-author, and co-project chief, Jonathan Wynn, a geologist from the University of the South Florida. "Not only is the ice cover removed leaving the surface water exposed to man-made carbon dioxide, the surface layer of frigid waters is now fresher, and this means less calcium and carbonate ions are available for organisms."

Researchers were able to investigate seawater chemistry at high spatial resolution during three years of research cruises in the Arctic, alongside joint U.S.-Canada research efforts aimed at mapping the seafloor as part of the U.S. Extended Continental Shelf program.  In addition to the NOAA supported ECS ship time, the ocean acidification researchers were funded by the USGS, National Science Foundation, and National Oceanic and Atmospheric Administration.

Compared to other oceans, the Arctic Ocean has been rather lightly sampled. "It's a beautiful but challenging place to work," said Robert Byrne, a USF marine chemist. Using new automated instruments, the scientists were able to make 34,000 water-chemistry measurements from the U.S. Coast Guard icebreaker. "This unusually large data set, in combination with earlier studies, not only documents remarkable changes in Arctic seawater chemistry but also provides a much-needed baseline against which future measurements can be compared." Byrne credits scientists and engineers at the USF college of Marine Science with developing much of the new technology.

Information on the most recent Arctic research cruise is available on online,