Posted by Wolf on Thursday, 12 September 2013 in Climate Change 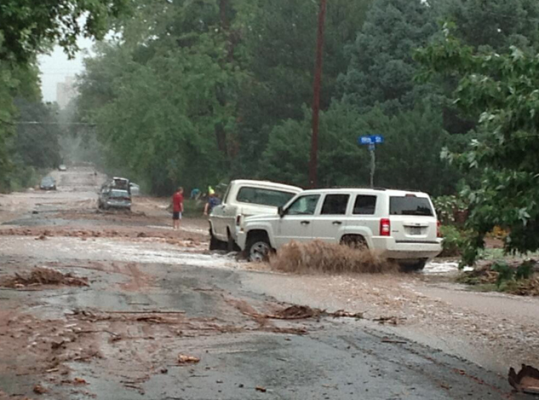 Massive flooding has made the streets of Boulder impassable and destroyed multiple homes in Boulder County, according to Officer of Emergency Management officials.

One person was killed in Jamestown when a structure collapsed because of the flooding, the OEM said.

The National Weather Service has issued a flash flood emergency for Boulder County and northwest Jefferson County. A mandatory evacuation has been issued for Jamestown and the Fourmile burn scar area.

CU-Boulder announced that the campus will be closed on Thursday because of the flooding.

An evacuation center for the mountain residents has been sent up in Nederland. Evacuees in Boulder can go to the YMCA of Boulder Valley.

Earlier centers at the YMCA at 28th and Mapleton and the North Boulder Rec Center had to abandoned because of rising water.

Almost all roads to Boulder were cut off because of the flooding, including U.S. 36 at Sheridan Boulevard and the main roads down the canyons. U.S. 36 was also closed between Lyons and Estes Park.

The weather service called the situation in Lyons "extremely dangerous" and said evacuations may been needed. At 2:29 a.m., the weather service reported an "overtopping" dam near Big Elk Meadows, about 4 miles west of Pinewood Springs.

Another evacuation center has been seen up at the Allenspark Presyterian Camp, 1306 Colorado 7.

Boulder Creek was running at more than 10 times its normal rate.

The weather service said at 1:29 p.m. that 4 to 6 inches of rain had fallen since mid-day Wednesday and as much as 7 inches in some locations.

At 3:30 a.m., the weather service said 1 more inch of steady rain was possible.

Streets throughout the city of Boulder were said to be impassable. Westminster and Thornton were sending dive teams to the area to assist as needed.

A flood warning for Larimer County, meanwhile, was extended to 5:30 a.m. Many roads were closed including U.S. 34 through Big Thompson Canyon and Colorado 14 through Poudre Canyon.

Another flash flood warning to the south, near the Waldo Canyon burn scar, was extended to 6:30 a.m. A campground near Fountain Creek in Colorado Springs was being evacuated by firefighters because of rising water.

At 11:30 p.m., Boulder police said on Twitter that people in the Fourmile burn area should evacuate, using Poor Man or Gold Run roads into Gold Hill. The Boulder Office of Emergency Management said all residents of that burn area should get to higher ground immediately.

The Boulder OEM warned motorists to stay off the roads as more and more streets were closed because of water. Flooded intersections were reported throughout Boulder, Fort Collins and smaller towns in northern Colorado. Stranded vehicles were common.

Rain pounded much of the Front Range all Wednesday night, with as many as five overlapping flash flood warnings issued.

The National Weather Service called it "a pretty serious situation" at 9:45 p.m. and said 3.35 inches of rain had fallen in Boulder the past six hours.

The Daily Camera reported at 10:40 p.m. that the University of Colorado was beginning to evacuate family housing. The campus police said on Twitter that the evacuations were limited to some housing near Boulder Creek, but said at 11:15 p.m. that about 100 to 200 people were evacuated.

A siren sounded about 10 p.m., meaning people should stay away from Boulder Creek.

Mike Chard, Boulder OEM director, said officials expect another 1 to 3 inches of rain over the next few hours.

Unofficially, more than 6 ¼ inches of rain had fallen in Boulder since Monday.

Mudslides and rockslides were also common, with parts of U.S. 6, Boulder Canyon, Colorado 14 and U.S. 287 all reporting problems and temporary blockages during the evening. Lefthand Canyon was reported blocked by one of the many slides. Interstate 70 was also closed by slides in Clear Creek County.

The heavy rain is expected to continue through much of night.

At 10:01 p.m., a flash flood warning was issued until 1 a.m. for parts of Adams, Arapahoe and Denver counties.

Water was rushing across U.S. 287 near Bonner Peak, the Larimer County Sheriff's Office reported. Colorado 14 was closed in spots.

A flood advisory was also in effect for southeastern Larimer County.

To the south, U.S. 24, which closed earlier for a flood warning Wednesday morning, was closed again Wednesday night. At 10:20 p.m., CDOT reported rocks and debris from the Waldo scar were flowing onto the road.

Fountain Creek in Manitou Springs was running high, but no flooding was reported in that town.

Street flooding caused road closures in the town of Erie Wednesday evening, where more than 2 ½ inches fell in a short time. The most severe flooding was between Erie High School and Bonanza Drive. Erie Parkway was closed in both directions between Bonanza Drive and Weld County 7.

At 9:15 p.m., the Boulder OEM tweeted that water was blocking Arapahoe and East County Line and that the water at Vista Parkway and Singletree was 3 feet deep.

Lookout Road near 95th Street in eastern Boulder County was closed because of flooding. South Boulder Road was closed east of Boulder as well.

Westbound U.S. 6 was closed in Cleark Creek Canyon west of Colorado Highway 58 because of a rockslide, the Colorado Department of Transportation said. Another mudslide closed U.S. 6 in both directions 5 miles east of Edwards near Hanging Lake.

A large boulder, loosened by the rain, rolled onto a Golden street and minor street flooding was reported.