Posted by thatsenough on Thursday, 24 October 2013 in Earth Violators

Elephants Are Dying in Record Numbers 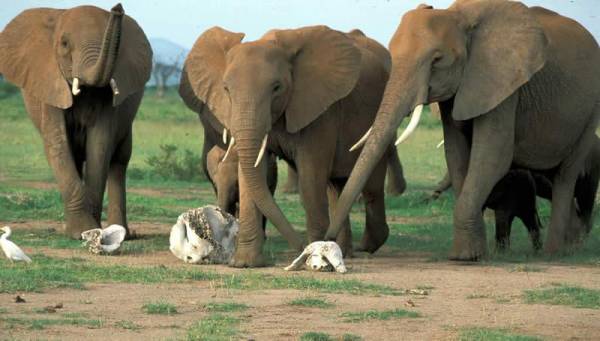 China’s demand for luxury knickknacks lies beneath some spectacular carnage of late. As we highlighted in August, the illegal ivory trade funds al-Shabaab, the terrorist group behind the Westgate Mall massacre in Kenya late last month. Al-Shabaab finances as much as 40% of its operations this way.

The supply of ivory for al-Shabaab and other militant groups is, obviously, dead elephants. As demand for ivory continues to surge in China and other Asian countries, the slaughter is growing industrial in scale and efficiency, fueling a trade worth $7 billion to $10 billion a year. Take for instance what’s going on in Zimbabwe’s Hwange National Park. In what may be the single worst poaching incident in Africa in recorded history, so far, official data says 90 elephants have died from cyanide used to poison salt licks at watering holes. The actual death toll could be as high as 100.

“Poisoning is not really common as a means to kill elephants but, unfortunately, in recent years we have seen more instances. The Hwange massacre, however, is on a scale not previously witnessed,” says Tom Milliken, an expert on poaching and the illegal ivory trade at Traffic, a wildlife trade monitoring network.

And the brutality isn’t limited to elephants. The cyanide has killed “large though at this stage untallied numbers” of lions, cheetahs, zebras wildebeest and scores of other species caught in the proverbial crossfire, reports the Independent Online. Vultures, which typically feed on animal carcasses, are dying too.

“This is the worst ecological disaster we have seen, and the fallout is going to be massive,” Johnny Rodrigues, chairman of the Zimbabwe Conservation Task Force, told the Independent Online.

The Hwange mass slaughter reflects a larger trend of “industrial” killing carried out by heavily armed groups, not just impoverished local hunters. As many as 50,000 elephants were killed for ivory in 2011, the last year with reliable data. That means poachers are wiping out 7.4% of the elephant population a year at a minimum, faster than the rate at which they reproduce.

The red line reflects the average; the shaded-in area shows the upper and lower bounds."Elephants in the Dust," Traffic

A Zimbabwe court has found three men responsible for the Hwange slaughter, sentencing them to 15-16 years in prison and fining them heavily. (It’s not clear whether they had any ties to terrorist militias.)

The weird thing is that, as far as enforcement goes, it’s illegal to kill elephants and sell their tusks. But not necessarily to buy ivory—or, at least, not in China. That’s because, in 2008, international regulators let China buy a 60-tonne ivory stockpile that can be legally traded. (Here are some examples of ivory products for sale on Taobao, a leading Chinese e-commerce site.)

That loophole fuels the elephant-killing that is arming terrorists and ravaging ecosystems; after all, it’s hard to tell legal from illegal ivory. But that’s even assuming China’s trying. And it’s not, the Environmental Investigation Agency, a non-governmental organization, reports (pdf, p2). “[I]vory is widely available throughout” China, found the EIA, and “there is no evidence of any control or enforcement in place.”