This tiny fish is scarfing down your plastic trash 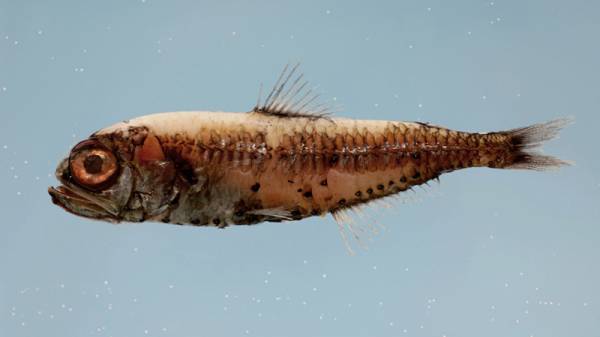 There's more plastic floating around the ocean than any other type of marine debris—that we know. What's harder to figure out is just how much is out there. A recent survey of marine plastic debris found something surprising: Nearly 99% of it was missing.

"We were expecting values in excess of one million tonnes [1.1 million tons] of plastic, and only found between [10,000] and 30,000 tonnes [11,000-33,000 tons] of plastic," Carlos Duarte, director of the University of Western Australia Oceans Institute, recently said in a presentation. "This doesn't mean plastic isn't being produced and released, it means plastic is being lost somewhere."

Where might it have gone? A lot of it's going into the stomachs of a lanternfish.

Much of the missing plastic is small debris of a size resembling small organisms called zooplankton. This squares with past research showing that lanternfish had been chowing down pretty heavily on smaller chunks of plastic debris. A 2008 study published in Marine Pollution Bulletin found around 35% of fish specimens with plastic in their stomachs. Though on average they consumed two pieces of plastic, one lanternfish had gorged on 83 chunks.

How could such a tiny fish put away hundreds of thousands of tons of plastic? For one thing, their populations are massive, making up a minimum of 50-60% of deep sea fish biomass.

Lanternfish also abound in the five gyres of the ocean, meaning huge pools of stagnant water where plastic typically accumulates. During the day, lanternfish live at depths between 300 meters (980 feet) and 1,500 meters (4,900 feet). But as sundown approaches, to evade predators and feed on zooplankton, they swim toward the surface. That's the largest migratory movement on earth, says Duarte, and it happens every day.