Posted by stringer on Friday, 15 November 2013 in Animals

How Can You Help The Elephants? 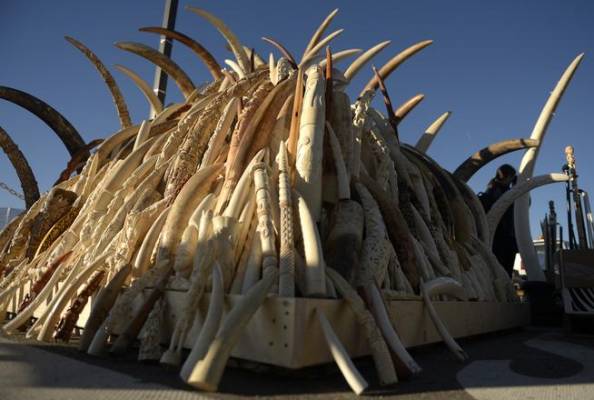 Here is some ways you can help the elephant

With the elephant poaching epidemic in Africa running rampant — and renewed ivory lust growing worldwide — experts fear the survival of the species is at stake.

The title of a recent New York Times article says it all: "Elephants Dying in Epic Frenzy as Ivory Fuels Wars and Profits." It’s horrific and heartbreaking. Africa is in the middle of a monumental elephant massacre. Poachers are wiping out tens of thousands of elephants each year, more than at any time in the previous two decades — and the underground ivory trade has become dangerously militarized.

“Like blood diamonds from Sierra Leone or plundered minerals from Congo, ivory, it seems, is the latest conflict resource in Africa, dragged out of remote battle zones, easily converted into cash and now fueling conflicts across the continent,” notes the Times.

In 1989, the Convention on International Trade in Endangered Species (CITES) passed a moratorium on the international commercial trade of African elephant ivory, except under a few rare circumstances. In the same year, the Bush administration passed theAfrican Elephant Conservation Act (AECA), banning the importation of ivory from the African elephant. Since then, the commercial ivory market in the United States has virtually collapsed.

However, that’s not the case in Asia. As much as 70 percent of the illegal ivory currently being plundered is being routed to China. Revered for millennia as a rare, status-boosting luxury item, ivory has long been out of reach for most. But as China’s economic boom has created a vast middle class, many are now in the market, which has elevated the price of ivory to a staggering $1,000 per pound on the streets of Beijing. The tusks of a single adult elephant can be worth more than 10 times the average annual income for an African worker.

The lust for ivory and the situation in Africa have created what is likely to be the greatest percentage loss of elephants in history. Many fear that the survival of the species is at stake.

What can we do?

If you’re a mercenary, you can strap on your Rambo gear and go to Africa to fight warlords and poachers. If you’re in China and purchase ivory objects, you can decide to stop. But what about the rest of us? None of us can single-handedly stop the ivory trade, but we are not helpless — as much as it may feel like it. Here are six actions we can take to support these grand creatures.

Or sell it, or wear it. New ivory is strictly banned, but antique ivory can be legally available for purchase. (The regulations are complicated; this is a good overview.) Ivory has traditionally been used for jewelry, billiard balls, pool cues, dominos, fans, piano keys and carved trinkets. Shunning antique ivory is a clear message to dealers that the material is not welcomed, and it's an easy way to show your solidarity with the elephants.

If only we could all be Jane Goodall or Dian Fossey, and move to the jungle or plains and thoroughly dedicate our lives to wildlife. Alas, for most of us that’s the stuff of daydreams. In the meantime, we can support the organizations that are actively committed to elephant preservation. There are many, but here are a few:

4. Be aware of the plight of captive elephants

Historically, zoos and circuses have offered elephants a life of, basically, indentured servitude. Fortunately, the zoo industry is starting to wake up and is beginning to develop more elephant-friendly environments, yet they have a long way to go. Circuses, even further. Make a difference by boycotting circuses that use animals, and by boycotting zoos that offer insufficient space to allow elephants to live in social groups, and where the management style doesn’t allow them to be in control of their own lives. See ElephantVoices for more information.

You can also support the Elephant Trails campaign of the National Zoo to improve the welfare of both wild and captive elephants.

Who wouldn’t want to take home a cute elephant, protect it from the bad guys, and raise it as their own? OK, so that’s not quite realistic, but there are any number of organizations that offer elephant adoptions so that you get cute pictures of “your” elephant, and they get currency to fund their elephant conservation efforts. World Wildlife Foundation, World Animal Foundation, Born Free, Defenders of Wildlife and theDavid Sheldrick Wildlife Trust all have adoption programs and are good places to start looking for that special pachyderm.

6. Get involved with Roots & Shoots

Founded in 1991 by Dr. Jane Goodall and a group of Tanzanian students, Roots & Shoots is a youth program created to incite positive change. There are hundreds of thousands of kids in more than 120 countries in the Roots & Shoots network, all working to create a better world. It’s a great way to get youth involved in conservation and pursue careers to help elephants and other wildlife.