Posted by plantitfilm on Friday, 06 December 2013 in Ecotourism 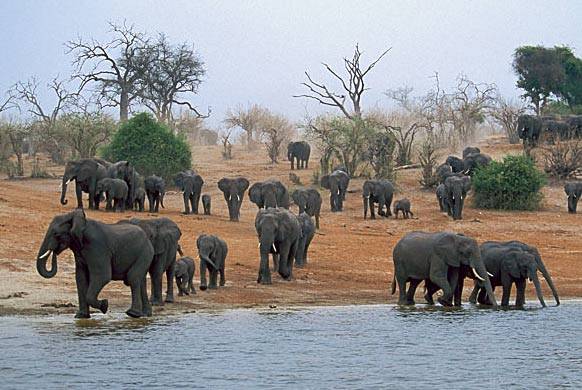 There are few places in the world that conjure the same kind of imagery as the Chobe National Park in Botswana.

Drifting through the savannas, torrents of water wind-off into a sunlit horizon; cheetahs stalk their prey as flocks of gazelle prance through the long, parched grass; and African elephants traverse hundreds of miles in search of greener pastures and fresh watering holes.

Poniso Shamukuni, a professional guide at Botswana's Chobe Park, said the country's environment and wildlife is like no other.

An oasis of wildlife, located in northern Botswana, Chobe is part of an international conservation region in southern Africa, spanning five countries and nearly 440,000 square kilometers. The Kavango Zambezi Transfrontier Conservation Area -- known as KAZA -- is a partnership between Angola, Zimbabwe, Zambia, Botswana and Namibia.

Twice the size of the UK and larger than Germany and Austria combined, KAZA is considered the world's largest wildlife preservation. The area draws tourists from all over globe and is also home to Victoria Falls, one of the seven natural wonders of the world, located on the border of Zimbabwe and Zambia.

To protect the region's natural beauty and attract tourists and investors worldwide, international cooperation between the five countries aims to pool resources to preserve each nation's delicate ecosystem while also opening borders.

But visa restrictions mean that traveling between countries is an exasperating and tricky affair for visitors.

But Dipotso is confident member governments can eventually come to an agreement.

He said: "The KAZA visa is meant to have a one-stop shop where you get your visa and then you can easily travel to Angola ... Namibia, Botswana, Zambia and Zimbabwe."

The organization is now working with Zimbabwe and Zambia on a pilot visa. Dipotso added: "We expect the pilot to be completed by end of February 2014."

An international pact would allow visitors to experience the full extent of Africa's natural wonders.

Tourists visiting KAZA can see the continent's "Big Five" of leopards, rhinos, buffalo, lions and the world's largest population of African elephants, as well as 650 different species of birds and 160 types of fish.