Posted by jdunker on Sunday, 08 December 2013 in Solar 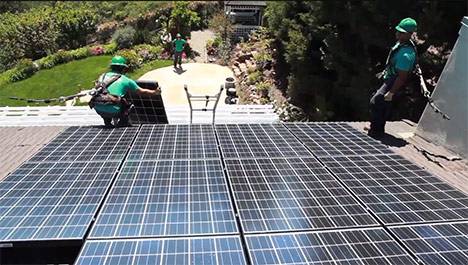 One of the main ingredients that explain the success of solar installers, apart from the falling cost of solar panels and the growing realization that we should get our electricity from clean sources, is their financial model: Rather than pay a huge chunk of money upfront to buy the solar panels and power electronics and get them installed, you enter a contract with the installer and lease the equipment from them for a monthly fee. The deal is structured in such a way that the fee is lower than what your electric bill would otherwise be, so you basically get solar power and save money without needed to pay upfront.

SolarCity is betting that this model isn't just a good match for solar panels. It has announced that, in partnership with Tesla (who's CEO, Elon Musk, is also chairman of SolarCity), it will begin leasing "energy storage systems" built around Tesla-designed battery packs. The goal is to store energy in the battery when it is cheap or free (either from the solar panels, or from the grid during off-peak, lower pricing periods) and then use it when energy is most expensive, during peak demand time. It also provides a backup source of energy if the grid goes down.

Benefits are especially high for businesses because many are being charged rates partly based more on their peak demand. This system can help shave the peak by time-shifting energy usage to lower demand times.

It's a great concept that I hope will spread widely. It can help make the power grid smarter and reduce the need for 'peaker' power plants that are only running during part of the day.